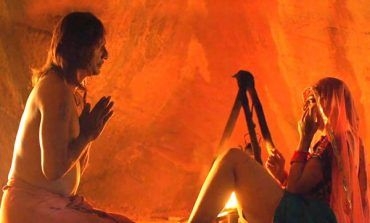 Radhika said that shooting for the intimate scene wasn't easy for her as she was contending with her own body image issues at that time and having to be nude on screen was a little intimidating.

However, the actress says that now she is proud of her body shape and size. Radhika added that she really needed a role like Lajjo in Parched. Talking about the reason for this, Radhika said that actors in Bollywood are constantly told what to do with their body and she always maintained that she would never do anything to her body or face.

On the other hand, for Radhika's co-actor Adil Hussain, who had essayed the role of her love interest in the film, doing the intimate scene was rather simple. He recently told ETimes, that he did not have issues doing a nude scene, as long as it portrays the 'complexities of human life.'

Adil revealed that before the cameras rolled, he asked Radhika, 'What about your boyfriend?' to which Radhika replied that she was married. She then asked him, 'What about your wife?' and Adil told her she has 'no problems.'

Parched premiered at the Special Presentations section of the 2015 Toronto International Film Festival. It is a story of four women from a village in Rajasthan, who are victims of practices of patriarchy, child marriage, dowry, marital rapes and physical and mental abuse.