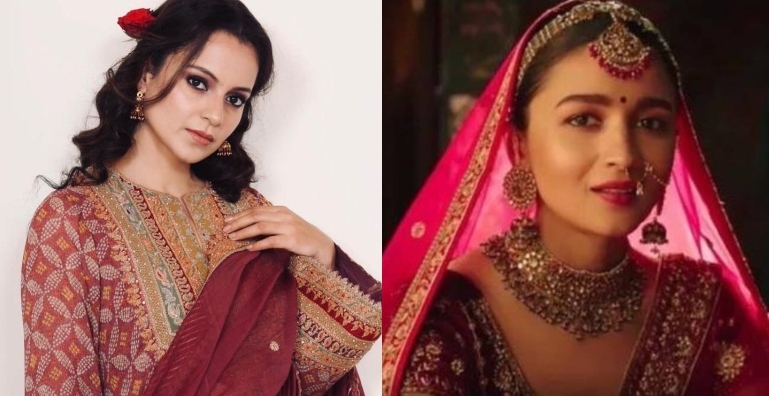 Amid the controversy over Alia Bhatt's recent 'kanyadaan' ad, actress Kangana Ranaut slammed the actress and the popular brand for trying to 'manipulative' customers. Kangana said that they are 'using religion and minority politics' to sell things.

Alia recently starred in Manyavar Mohey's latest commercial. In the ad, which sparked a debate online, Alia plays a bride who's seen questioning the Hindu tradition of 'kanyadaan'.

On Tuesday, sharing her thoughts on the same, Kangana Ranaut penned a note slamming Alia, the brand and her stylist.

In the post, she wrote: "We often see a Martyr's father on television when they loose a son on the border they roar don't worry I have one more son, uska bhi daan main iss dharti Maa ko dunga... Kanyadaan ho ya putradaan (I will give him away for the protection of Mother Earth. Be it giving away one's daughter or son)... The way a society looks at the concept of (lack of equivalent word in English or Urdu using) renunciation shows it's core value system... When they start to look down upon the very idea of daan (charity/donation)... Then you know it is time for reestablishment of Ram Rajya.... The king who renounced everything he ever loved only to live the life of a Tapasvi (monk) Please stop mocking Hindus and their rituals.... Dharti (Earth) and woman both are mothers in scriptures they are worshipped as goddesses of fertility.... Nothing wrong in seeing them as precious and very source of existence (shakti)."

"Humble request to all brands ….. don’t use religion, minority, majority politics to sell things …. Stop manipulating naïve consumer with shrewd divisive concepts and advertising," she wrote in the caption and tagged them.

In another post, Kangana said that 'woke dimwits' won't understand the science behind gotra. She wrote: "Hinduism is very sensitive and scientific when it comes to gene pools and bloodline... In a marriage a woman leaves her gotra and bloodline and enters another gene pool and gotra... She needs not only her own father's permission but also of all forefathers and ancestors whose blood flows in her veins... for this smooth transition father allows her from everyone's side and releases her from any gotrarin... But woke dimwits won't understand this complex science... Better to simply ban such adds and shut them up."

"Dhan is not a dirty word, your mind is dirt, dhan is used in many contexts like 'maine Ramratan Dhan payo' aur 'Putra Dhan' or 'Saunrya aur roop ke dhani hona' are commonly used tersm... Kanya Dhan or paraya dhan does not mean you are selling your daughter... Stop this anti Hindu propaganda" she added.

In the commercial, Alia Bhatt is seen sitting at the mandap with her husband-to-be.

"Am I a thing to be donated? Why only kanyadaan," she can be heard saying.

Check out the commercial here:

Last year, Kangana had taken at Alia Bhatt in a sensational interview with Arnab Goswami where made some shocking revelations about the industry.

had slammed Alia Bhatt for collecting the Best Actress award for a 'mediocre role' as Safeena in 'Gully Boy'. Revisiting 'Koffee with Karan' episode, where Alia had mocked Sushant Singh Rajput in the rapid fire round.