Outside Mannat, fans across all ages, children, college students and even elderly couple, had showed up to celebrate Aryan's homecoming.
FPJ Web Desk 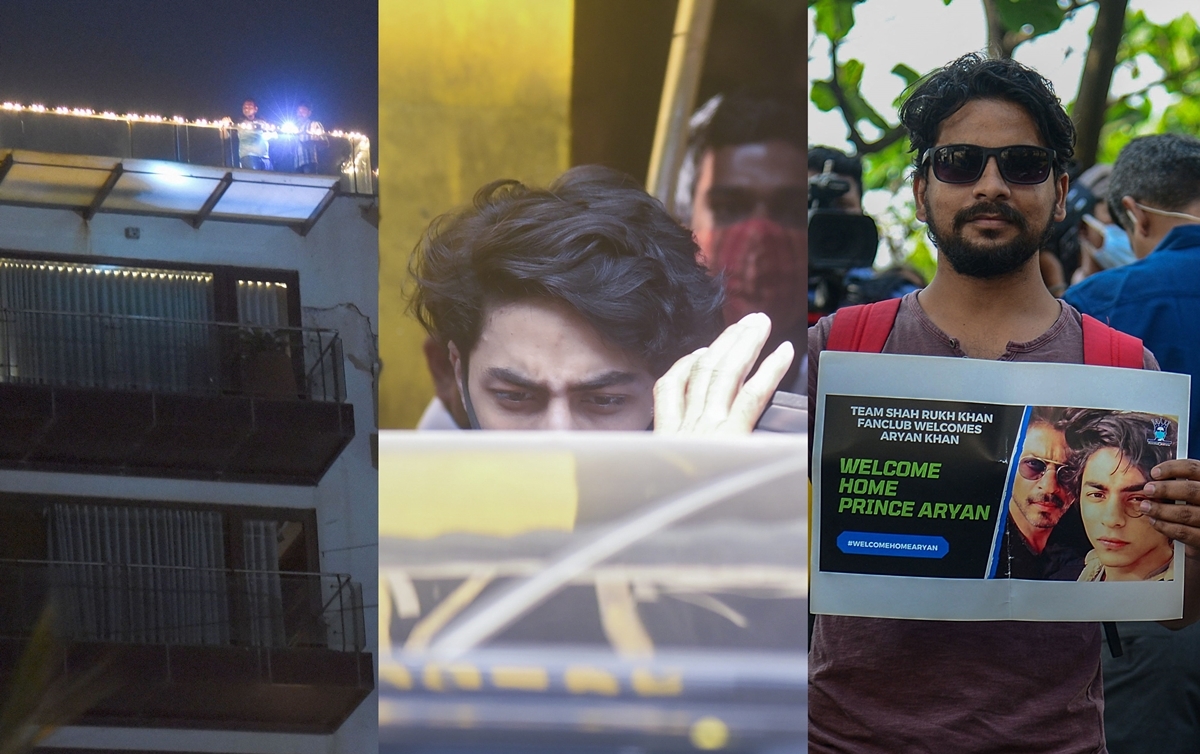 Aryan Khan, son of Bollywood superstar Shah Rukh Khan, walked out of the Arthur Road prison, after spending 22 days in the central Mumbai facility following his arrest during a drug raid on a cruise ship off the city coast.

The 23-year-old, arrested on October 3 by the Narcotics Control Bureau (NCB), walked out of the prison, his 'home' since October 8, at 11 am and got into a waiting car, which reached his actual home Mannat in suburban Bandra shortly after 11.30 am.

Now, according to a report by India Today, Aryan will not be stepping out of his house for the next couple of days. According to an insider, Aryan will remain indoors to avoid paparazzi that has been tailing his car, and camping outside Mannat ever since his arrest.

A large crowd of Shah Rukh Khan's fans had gathered outside the prison since early morning. A sizeable media contingent was also present to cover Aryan's release from the jail.

Outside the prison, fans and onlookers cheering for Shah Rukh Khan and Aryan and trying to catch a glimpse of the superstar were in for a disappointment as they could not see the actor's face and had to assume that he was in the vehicle.

Outside Mannat, fans across all ages, children, college students and even elderly couple, had showed up to celebrate Aryan's homecoming. The lane to Mannat's entrance was jam-packed with crowds. Police and Shah Rukh Khan's private security had to clear the area for Aryan's car to move smoothly.

Even after the convoy went inside the bungalow, many fans waited in the hope that Shah Rukh Khan might wave to the eager supporters from the bungalow, as he does annually on his birthday.

Among the fans present was a self-proclaimed seer who sat outside the gate of Mannat in the morning to pray for Aryan and "the youth of Maharashtra so that they fall into the trap of drug addiction."

Ahead of Aryan's release, Mumbai police had increased police presence outside the Arthur Road prison as a precautionary measure to control the crowd, a police official said.

Besides local police, SRPF team was also present and barricades were put up outside the prison, he said.

Aryan was granted bail by the Bombay High Court on Thursday. Shah Rukh Khan's actor-friend Juhi Chawla stood as surety for the 23-year-old before the special court, designated to hear cases related to the Narcotics Drugs and Psychotropic Substances Act (NDPS).

The HC on Friday afternoon made available its operative order in which it imposed 14 bail conditions on Aryan Khan and his co-accused in the case, Arbaaz Merchant and Munmun Dhamecha, who were also granted bail, stipulating their release on a personal bond of Rs 1 lakh each with one or two sureties of the same amount.

The relief to the trio came just a day before the HC was scheduled to take a two-week break for Diwali.

In the five-page order, signed by Justice N W Sambre, the high court said the trio will have to surrender their passports before the NDPS court and shall not leave India without taking permission from the special court.

Also, they will have to attend the NCB office each Friday between 11 am and 2 pm to mark their presence, the HC said.