On the occasion of India's 75th Independence Day, actors Amitabh Bachchan, Dharmendra, Madhuri Dixit were among other film celebrities who extended greetings to their fans and followers on social media.
FPJ Web Desk 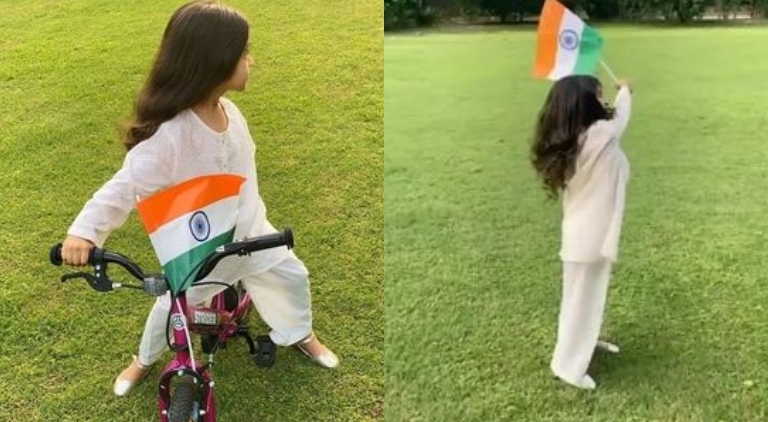 On the occasion of India's 75th Independence Day, actors Amitabh Bachchan, Dharmendra, Madhuri Dixit were among other film celebrities who extended greetings to their fans and followers on social media.

Former actress Asin also took to social media to share a post and posted pictures and videos of her daughter Arin.

On Sunday evening, Asin took to her Instagram to share pictures and videos of her three-year-old celebrating Independence Day.

Dressed in a traditional white attire, Arin is seen holding the tricolour flag in her hand and waving it in their garden. Another video showed her running with the flag while in a photo Arin was seen riding a bicycle with it.

Check out the pictures and videos here:

Asin Thottumkal, who was already a renowned face in South made her Bollywood debut with Aamir Khan’s 'Ghajini'. She then starred in films like 'Ready', 'Khiladi No 786' and 'All Is Well'.

The actress quit the showbiz after tying the knot with her long-time boyfriend, Micromax co-founder Rahul Sharma. She welcomed daughter Arin in the year 2017.

The actress, who is known to be private person, prefers keeping her personal life away from social media and rarely shares glimpses of her daughter.

Last year in October, Asin had penned down a sweet note for her daughter as she turned three.

"She’s 3 now- Arin Rayn (Her name - both first name and surname, a combination of Rahul and my first names. ‘Rayn’ is pronounced ‘Ra’-‘in’ but spelt with a twist. A short, simple name, gender neutral, secular, free of religion, caste and patriarchy.) Thank you to each and everyone of you who sent us love and wishes! Wishing everyone health and happiness," it read. Prachi Desai calls out Ajay Devgn for forgetting her, Asin and other actors on 8 years of 'Bol...