Cordelia cruise raid: Aryan Khan, 7 others in NCB custody till Thursday; one more held from Andheri 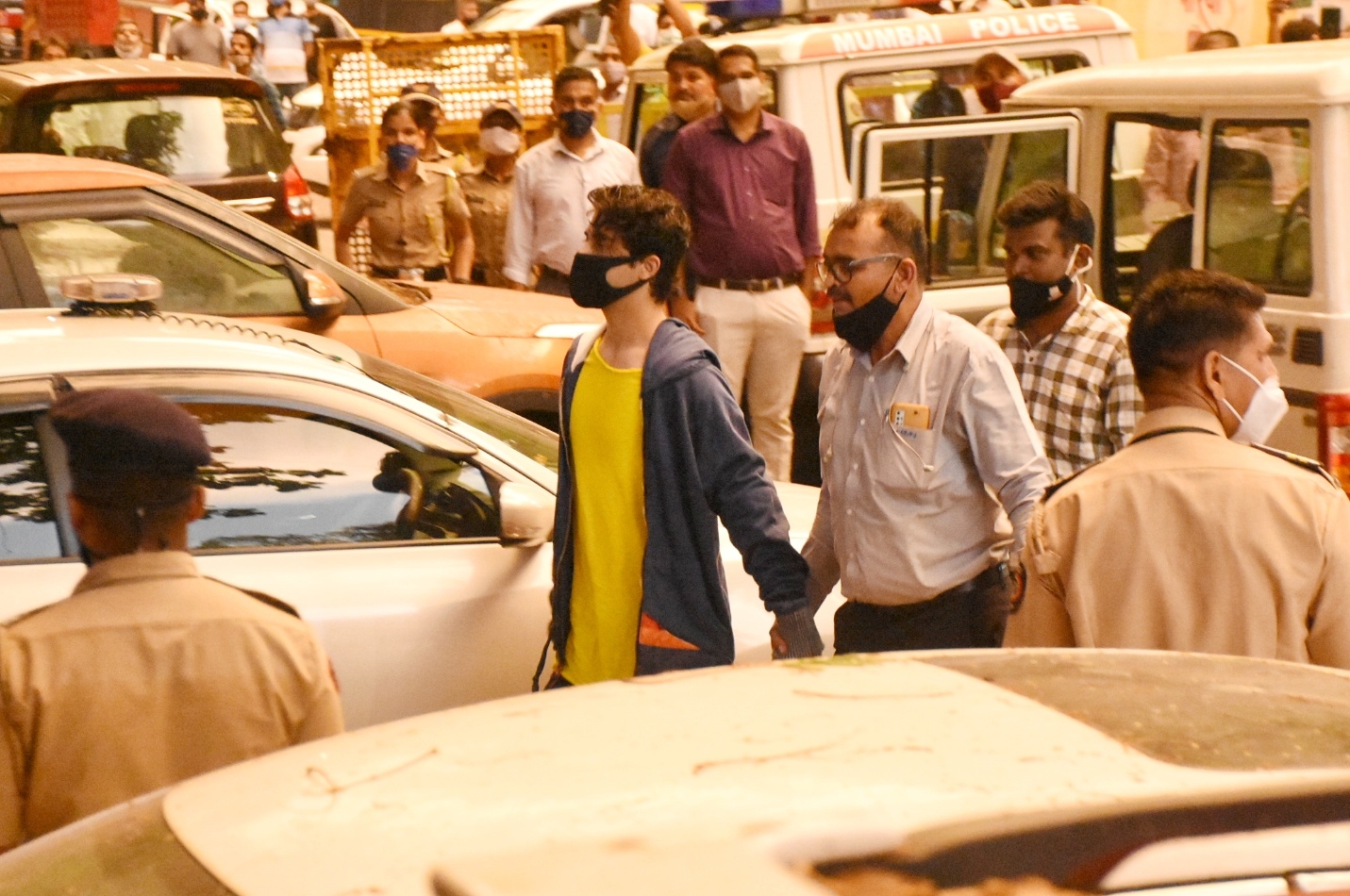 Aryan Khan outside the court on Monday. | Sachin Haralkar/FPJ

A man identified as Shreyas Nair was arrested from Andheri on Monday besides two others in the mid-sea rave case that has landed Bollywood superstar Shah Rukh Khan’s 23-year-old son Aryan and seven others in the Narcotics Control Bureau (NCB) net.

A city court yesterday extended Aryan Khan and others’ custody till Thursday, even as the NCB accused Nair of playing a role in supplying drugs to a few accused already arrested. The NCB sources said that the agency received information about a group of people having created a created ruckus onboard the cruise and also damaged ship property. “We traced three people and found hydroponic weed (cannabis grown without soil) from one of them,” an NCB official said. The NCB on Monday again conducted searches at the cruise which was raided on Saturday and is believed to have seized some material and substances.

“On the basis of WhatsApp chats of a few of the arrested persons, we learnt they were in touch with suppliers and peddlers. Based on this information, we detained Nair from Andheri and after a detailed enquiry, he was placed under arrest. It is suspected that Nair supplied drugs to a few of those arrested. The WhatsApp chats revealed that some of them had been discussing for some time now, even during their visits abroad,” a NCB official said.

The NCB yesterday made enquiries with at least eight more people in connection with the mid-sea rave. The agency sources said that some of the people who are being enquired are connected with the mid-sea party.

The NCB yesterday told the court that material found in Aryan Khan's mobile phone points to international drug trafficking. Additional Solicitor General Anil Singh, appearing for the NCB, told the court that there are photos in the seized phone pointing to international drug trafficking. “There are discussions about payment modes and the accused has used code names,” he said.

Singh said that while the defence may argue that the offences were bailable as they deal with small quantities of drugs under the Narcotic Drugs and Psychotropic Substances (NDPS) Act, a Bombay High Court judgment has ruled that all offences under the NDPS Act were non-bailable. He said that the NCB has raided a supplier's Juhu residence and found commercial quantity of drugs. “A group or gang is operating and communications are going on; hence, custody is required to find out who are the actual suppliers or culprits. These are all connected -- one gang, one racket,” he said.

A NCB officer told the court during the proceedings that the agency has found chats on Aryan’s phone on weed, payment in other modes, and groups chats which discussed buying weed. “There are chats using code words, unknown persons whose names are not saved, and chats about bulk purchase of certain drugs,” he said.

Arguing for Aryan, advocate Satish Maneshinde said that his client was a “special invitee (to the party) being a person connected with the film industry”. He said that he was checking into the ship with his friend Arbaaz Merchantt and did not even have a boarding pass. “Have not paid for the cruise, have no contact with the ship owners,” the lawyer said for Aryan.

He said that Aryan’s bag and person were searched, but nothing was recovered from him, either in small quantity or in contravention of the NDPS Act. “If in a running train something is found, will the NCB detain everyone on board?” Maneshinde asked.

The NCB claims to have recovered six gm charas from Arbaaz Merchantt. Aryan’s advocate said that he had no connection with the recovery and contrary to claims made by the NCB, cocaine, mephedrone, etc were not seized from him or his friend, but allegedly from some of the other accused. “These are seizures from other accused who are not known to me, not my friends. I cannot be roped into the seizure,” Maneshinde argued on behalf of Aryan.