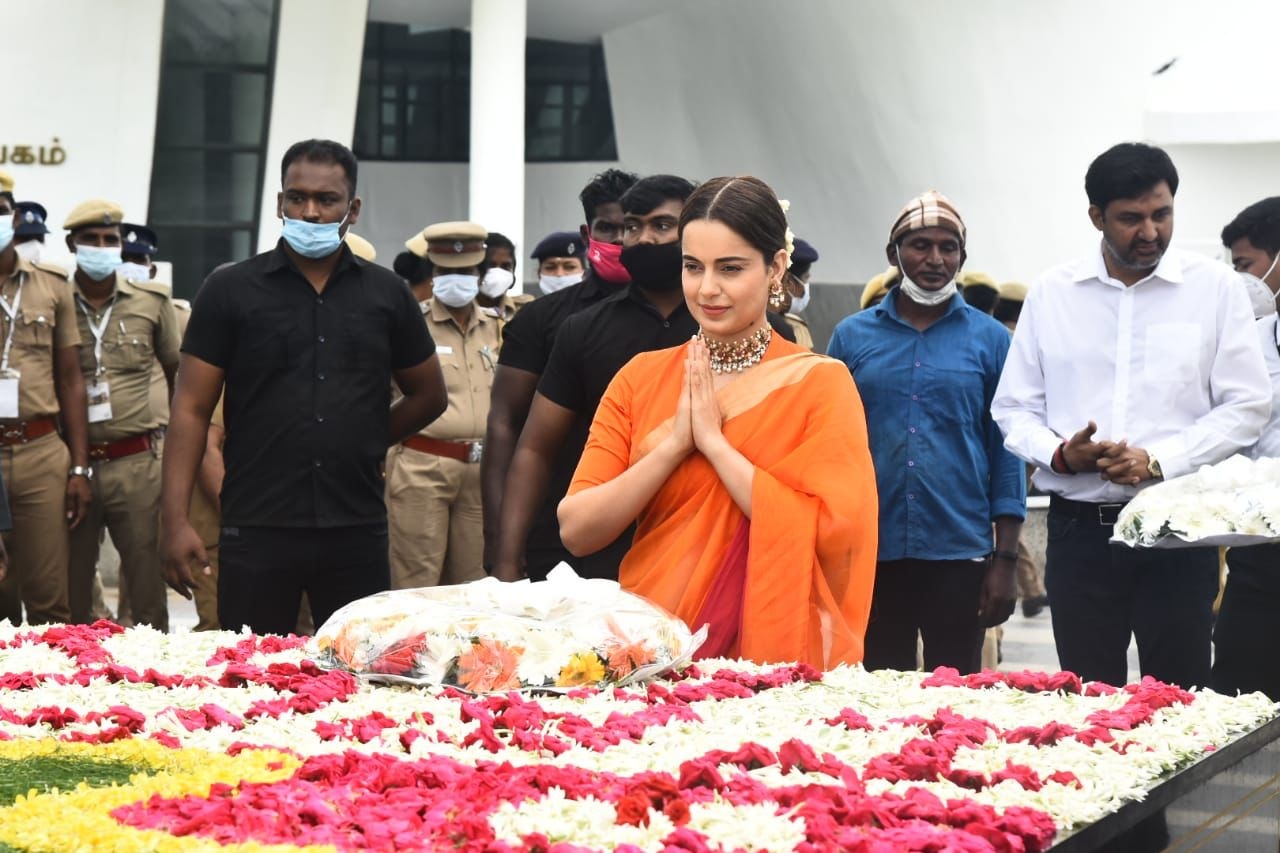 As the film inches closer to release, Kangana Ranaut along with team ‘Thalaivii’ seeks blessings from the late Jayalalithaa at her memorial in Chennai.

Looking forward to a theatrical release on 10th September, team ‘Thalaivii’ is thrilled to mark the legendary Superstar Jayalalithaa's return to the silver screen.

Directed by Vijay, ‘Thalaivii’, presented by Vibri Motion pictures, Karma Media Entertainment and Zee Studios in association with Gothic Entertainment and Sprint films has been produced by Vishnu Vardhan Induri and Shailesh R Singh and Co-produced by Hitesh Thakkar and Thirumal Reddy with Brinda Prasad as the Creative Producer.

‘Thalaivii’ is set to release in theatres worldwide in Hindi, Tamil and Telegu by Zee Studios on 10th September, 2021.

Touted as one of the biggest Bollywood releases this month, Kangana's 'Thalaivii' has set high hopes as the film's trailer managed to fuel the anticipation among audiences. Post 'Bell Bottom' and 'Chehre', 'Thalaivii' would be the third Bollywood project to get an exclusive theatrical release in India.

The movie marks Kangana's second biopic after the 2019 film 'Manikarnika: The Queen of Jhansi'.

Meanwhile, Kangana recently wrapped-up of the shoot of her upcoming action-packed film 'Dhaakad' in Budapest.

Directed by Razneesh Ghai 'Dhaakad' is an action thriller. The film also features Arjun Rampal and Divya Dutta, and is scheduled to release on October 1.

Apart from "Dhaakad", Kangana also has films such as period drama 'Manikarnika Returns: The Legend Of Didda' and 'Tejas' in the pipeline.

Kangana will also don the Director's hat for the second time in film 'Emergency', based on the life of late Indian Prime Minister Indira Gandhi. 'This is unfair and cruel': Kangana Ranaut slams major multiplex chains for refusing to screen...