Actors Shamita Shetty and Raqesh Bapat have been grabbing attention for their mushy moments in 'Bigg Boss OTT'.

They have been a connection since 'Bigg Boss OTT' began. Through the weeks, they hinted that they were attracted to each other and became one of the most-talked-about couples on the show.

In the latest episode of the reality show, Raqesh told Shamita that he loves her, leaving her speechless.

During a light-hearted conversation, Shamita asked Raqesh to say a few good things about her. When Raqesh didn't answer immediately, Shamita jokingly hit him and said, "You take so long to say something nice?"

However, after taking a long pause, Raqesh told Shamita, "Je t’aime," which translates as I love you in French.

Shamkita, who was shocked to hear this, asked him, "Do you even know the meaning of Je t’aime?" To which, the actor replied, "Yes, I do," leaving Shamita speechless.

For those unversed, Raqesh was recently given the stamp of approval by Shamita's mother Sunanda Shetty, who visited her on the show. She had called Raqesh a 'sweet man' and a 'gentleman’.

During the 'Sunday Ka Vaar episode', host Karan Johar had told Shamita that her on-and-off fights with Raqesh were coming across as extremely annoying. However, Raqesh has time and again said that he likes Shamita and would want to explore their relationship outside the BB OTT house. 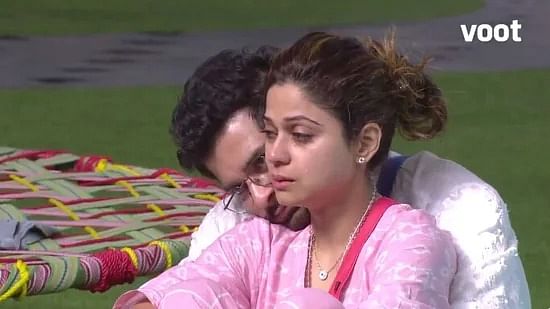