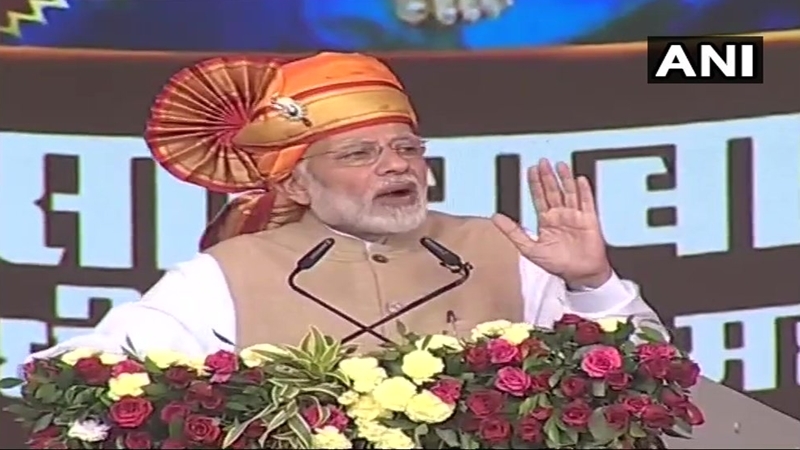 Jagdalpur (Chhattisgarh): Prime Minister Narendra Modi on Friday came down heavily on the Congress accusing the party of backing urban Naxals who misguide the tribal youth of the state and force them down the path of Naxalism.

Speaking at a rally here ahead of the assembly elections in the state due on November 12 and 20, the Prime Minister said: “Children who should hold pens in their hands, they are now holding guns in a monstrous manner. Urban Maoists live a luxurious lifestyle while they ruin the lives of children belonging to tribal community, and the Congress supports these people (urban Maoists).”

Further training guns at the rival Congress, Prime Minister Modi said: “For past 10 years, Congress created obstructions for the government to carry out developmental work in the state and deliberately tried to delay projects in Chhattisgarh. But despite all this, Raman Singh ji didn’t stop the developmental work.” “It’s been so many times that Congress has come to power in the country but unfortunately they have not done enough for the upliftment of the underprivileged and tribals,” he said.

He also lauded former Prime Minister Atal Bihari Vajpayee for creating a separate ministry for the tribals. “Congress party considers Dalits, underprivileged, victims and poor people as their vote bank and are not willing to treat them as humans,” he added.

“The day is not very far when Chhattisgarh will reach to such heights that people from different parts of the country will come here seeking employment, income opportunities. Our government has connected 9,000 villages in Chhattisgarh. We laid a network of National Highways with an investment of Rs 35,000 crore,” Prime Minister Modi said.

In his concluding remark, the Prime Minister said that the Bharatiya Janata Party (BJP) doesn’t discriminate people on the basis of gender or caste. “We believe in sabka sath, sabka vikas. My government wants progress for everybody. Earlier, elections were all about a candidate’s caste and family.” Addressing the voters in the rally, Chief Minister Raman Singh said that he would work day and night to fulfill the dreams of Vajpayee to develop Chhattisgarh.

Emphasising that the BJP would again sweep the polls and emerge victorious, he said: “No other party will come to power in Chhattisgarh, and if an outfit wins the election even in some corner of Bastar, it will be a blot on us.” The first phase of elections comprises 18 seats and these are distributed in eight Naxal-affected districts. Of these, 12 are Scheduled Tribe seats while one is a Scheduled Caste-reserved seat.

In the 2013 assembly elections, the BJP had bagged 49 seats, Congress got 39, Bahujan Samajwadi Party and Independent got one seat each in the 90-member House.