Uttar Pradesh: Next month's "Har Ghar Tiranga" campaign, which is being organized by the government of Uttar Pradesh, is already in the planning stages.

Teachers in Varanasi have begun a crowd funding campaign to purchase around one lakh flags that would be given to students on this independence day.

Basic Education Officer Rakesh Singh said, "The education department has been given a target of purchasing one lakh flags and distributing them among poor children for hoisting them under the campaign. We have to purchase the flags from the District Urban Development Authority (DUDA) against the payment of Rs 40 for each flag. To achieve the target of purchasing the flags, a fund of Rs 40 lakh is required. This fund is being arranged with public cooperation and through voluntary contribution."

Despite claims from officials that cash for flags must be gathered through public participation, headmasters and teachers have been given a deadline for accomplishing this task.

Sanat Kumar Singh, district vice-president of the Uttar Pradesh Prathamik Shikshak Sangh (UPPSS), said that his union's approval was not obtained prior to the decree authorizing teacher fundraising.

The Union government is commemorating Azadi Ka Amrit Mahotsav to honor the 75th anniversary of independence, and as a part of it, "Har Ghar Tiranga" has been adopted to encourage all Indians to fly the national flag at their residences.

The national flag will be flown from August 13 to August 15 as part of the program. The basic education officer also sent a letter to the block education officers on July 18 mentioning the names of banks and account numbers for depositing funds raised for flag purchase along with the target for flag purchase after the district administration assigned the task to each department to make the program a success.

As per the target fixed in the letter, each of the eight blocks - Chiraigaon, Cholapur, Harahua, Kashi Vidyapeeth, Arazilines, Pindra, Sevapuri and Badagaon have to contribute Rs 4.40 lakh to purchase 88,000 flags, while city and Ramnagar have been given the target of contributing Rs 4.80 lakh to buy 12,000 flags.

Referring to the same letter of the basic education officer, the block education officers of Harahua and Cholapur issued office orders fixing the target of flag purchase for each teacher of the primary schools.

Regarding these orders, the basic education officer said, "Funds of around Rs 4 lakhs have to be contributed by each block and we are trying to collect it through public cooperation and donations. Flags will be purchased with the amount which would be raised for it."

The basic education officer, however, asserted that no one is under any compulsion to make a financial contribution.  The teachers have been given three days to collect these funds.

Sanat Kumar Singh, the president of the teachers' union, stated, "We welcome the Har Ghar Tiranga program and teachers are also ready to take part in it with full enthusiasm. However, there should be voluntary financial support instead of issuing orders for fundraising as done by some block education officers without taking UPPSS in confidence. 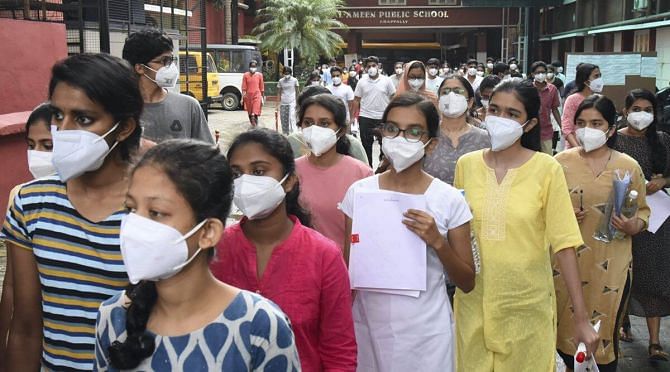