Students at AMU had planned a protest march on campus on Wednesday but were denied permission due to the district Assembly elections on Thursday.

Students later gathered at Duck Point on the AMU campus to protest the Karnataka hijab controversy. After deciding to hold a protest march on campus on Friday, they raised religious slogans and dispersed.

Mohd Wasim Ali, the proctor of AMU, said: "Students had sought permission in writing for carrying out a march in solidarity with girl students in Karnataka denied entry to college premises for wearing hijab (headscarf). However, in view of the model code of conduct being in force because of the ongoing assembly elections, the permission was denied for (the march) today (Wednesday) as Aligarh goes to polls on Thursday.

"The students were told that such a protest march on the eve of the assembly elections may cause a law-and-order situation. Because the message for the protest march had spread on social media, thus some students gathered at Duck Point on AMU campus on Wednesday but they, too, dispersed later," the proctor said.

The students said that "the university administration has not denied permission for the protest march at AMU against the Karnataka hijab controversy, but has only delayed it because polling is to take place in Aligarh on Thursday".

"Thus, we agreed to postpone the protest march on Friday, the day after polling." 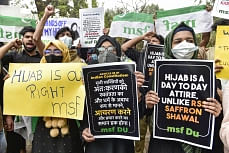