R-naught, which indicates the spread of COVID-19 in India, has been recorded at 4 this week, suggesting a very high infection transmission rate, according to a preliminary analysis by IIT Madras which predicts the peak of the third wave between February 1-15.
PTI 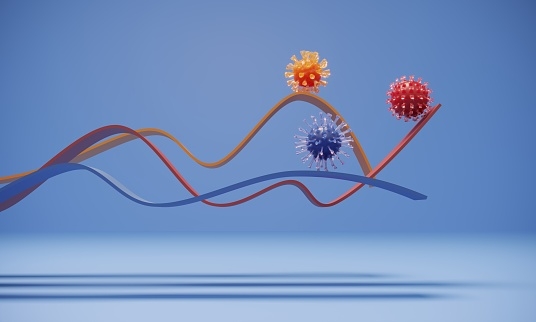 R-naught, which indicates the spread of COVID-19 in India, has been recorded at 4 this week, suggesting a very high infection transmission rate, according to a preliminary analysis by IIT Madras which predicts the peak of the third wave between February 1-15.

R-naught or R0 indicates the number of people an infected person can spread the disease to. A pandemic is considered to end if this value goes below 1.

Based on preliminary analysis by computational modeling done by IIT Madras, which was shared. The R0 value was close to 2.9 nationally in the past week (December 25 to December 31). The number was recorded at 4 this week (January 1-6).

Transmissibility probability, contact rate, and the expected time interval in which infection can happen.

"Now, with the increase in quarantine measures or restrictions, maybe the contact rate will go down and then, in that case, R0 can decrease. So, based on our preliminary analysis, which is based on the last two weeks, we can tell these numbers, but again, these numbers can change based on how much affirmative action is taken concerning the social gathering and all," he told PTI.

The Union Health Ministry on Wednesday said India is seeing an exponential rise in the number of coronavirus cases, which is believed to be driven by the Omicron variant. It also highlighted that the country's R naught value is 2.69, higher than the 1.69 recorded during the peak of the pandemic's second wave.

Jha said the ministry's estimates are based on a different time interval than IIT Madras which has done the preliminary analysis from the past two weeks.

He further said that as per their estimate, the peak in the current wave is expected to come between February 1-15, and it is expected to be sharper than earlier peaks.

"What we expect from the exploratory data analysis is that the peak will happen somewhere between February 1-15, and our analysis also shows that as compared to previous waves, there will be a sharper increase to the peak," Jha said.

He said this wave would be different from the previous waves because of vaccination and factors like less social distancing seen this time.

Responding to how it is estimated that there is less social distancing in this wave, he said during the first wave many restrictions were imposed but right now despite having a high number of cases there are not many restrictions imposed yet.

"But the advantage here is that almost 50 percent of the population this time has got vaccinated," Jha added.

The preliminary analysis has been done jointly by IIT Madras' Department of Mathematics and Centre of Excellence for Computational Mathematics and Data Science headed by Prof Neelesh S Upadhye and Prof S Sundar.

India saw a single-day rise of 1,41,986 new coronavirus cases, raising the tally to 3,53,68,372, which included 3,071 cases of Omicron variant reported across 27 states and union territories so far, the Union Health Ministry said on Saturday.