Media reports have said that 40 universities in China have not issued the NOCs required to apply for Chinese visas. While many universities have not been able to respond to the requests about NOCs, some have cited local lockdown measures enacted by provincial authorities as a major reason for their inability.

1,300 Indian students have received Chinese visas according to the China Foreign Ministry | Photo: PTI
Follow us on

China said on Monday that 1,300 Indian medical students have been issued visas despite Covid-19 restrictions in the East Asian country, which has witnessed a prolonged lockdown.

"As far as I know, despite COVID-19, progress has been made in the cross-border flow of personnel between China and India. At least 1,300 Indian students have received Chinese visas," in response to a media query on Chinese universities delaying "no objection certificates (NOCs) to Indian students," said Foreign Ministry spokesperson, Zhao Lijian during a press briefing.

Lijian also advised Indian students to stay in close touch with their universities and plan their return to the campuses. 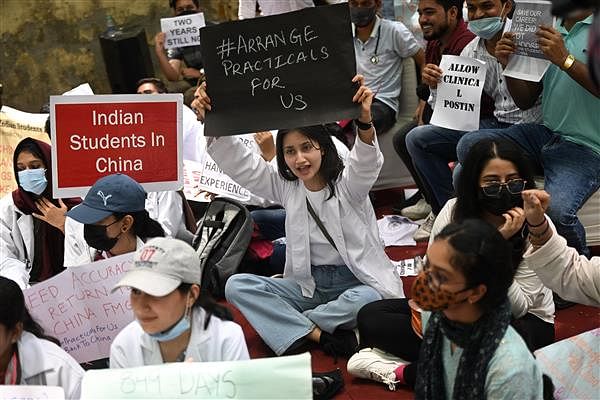 Media reports have said that 40 universities in China have not issued the NOCs required to apply for Chinese visas. While many universities have not been able to respond to the requests about NOCs, some have cited local lockdown measures enacted by provincial authorities as a major reason for their inability.

"I know you have followed very closely the developments regarding Indian students' return to China. I would refer you to the competent Chinese authorities. I can tell you that the Chinese government welcomes foreign students to resume or start their studies in China, and the government has provided possible assistance to the students who need it. Foreign students who wish to acquire a degree in China can apply for visas in Chinese embassies and consulates overseas. Since August 24, foreigners holding a valid residence permit for study can enter China directly with that permit," the Spokesperson said while replying to questions on whether there is any timeline while issuing the same documents to students from other countries.

Though China has begun issuing visas to Indian students, the suspension of flights between the country and India has affected thousands of students despite receiving their NOCs from Chinese universities. Many are also banking on countries such as Hong Kong and Sri Lanka as alternative routes, as reported by the Free Press Journal, though it's proving to be costly.

Earlier on Sunday, Indian Embassy in Beijing issued a comprehensive advisory to students planning to study medicine in China.

"The Embassy continues to receive queries from prospective Indian students as well as their parents regarding eligibility for Indian students who are pursuing clinical medicine programme in China to appear in the qualifying examination conducted by the National Medical Commission of India," stated the press release sent out by the Embassy.

The Embassy advised Indian medical students and their parents to see the gazette notification dated November 18, 2021, by the National Medical Commission (NMC).

"It has unambiguously stated in Clause 4(b) that foreign medical students must be "registered with the respective professional regulatory body or otherwise, competent to grant the license to practice medicine in their respective jurisdiction of the country in which the medical degree is awarded and at par with the license to practice medicine given to a citizen of that country," added the release.

The Embassy also apprised the Chinese authorities concerned and medical colleges with a request that they should ensure that all Indian students coming to China for clinical medicine programmes are educated, trained, and facilitated so that they can fulfill the above requirements of NMC.

"Any student, who joins for clinical medicine program in China after November 2021 and fails to obtain a license to practice as a medical doctor in China, will be rendered ineligible to appear for Foreign Medical Graduate Examination," read the release.

The Embassy also cleared a query on whether Indian students can work in Chinese hospitals in a capacity such as "assistant doctor" after completing their medical education in China but fail to obtain a medical practitioner license in China so as to enable them to earn a living and pay back education loans.

"The Embassy has formally approached relevant Chinese authorities to confirm the existence of such an option. The Embassy will share any information, when received from the Chinese side, in its social media handles," said the release.

The Indian Embassy also advised all prospective Indian students to refer to earlier advisories as well as relevant regulations of NMC before exploring options to study clinical medicine programmes in China.

"Prospective students/parents are advised to directly re-confirm all terms of reference of admission directly from the relevant University(ies) in China, before accepting such admission," said the release.