June made many Indians realise the enormous opportunities that lie ahead. Even in these politically turbulent times, India has the potential to trounce disbelievers, and emerge financially unscathed and vibrant. And, given the right policy planning and implementation, it can even usher in a new economic model which works on domestic demand, and export of manpower, not merchandise or commodities.  Inevitably, the focus will shift to services over manufacturing. Sounds fanciful?  But not really, if one takes a good hard look at some recent developments.

Last fortnight, Bloomberg New Energy Finance (BNEF) came out with its latest report on New Energy Outlook 2016. Its one-line summary was stark and simple: “Coal and gas to stay cheap. But renewables still win the race on costs”. The report goes on to add that solar and wind should become the cheapest ways of producing electricity in many countries during the 2020s and in most of the world in the 2030s. Onshore wind costs fall by 41% and solar PV costs fall by 60% by 2040.

Already, solar power (20 year) PPAs in the US have touched under 3 cents a unit level. Expect solar tariffs to fall further in India as well. Currently the lowest they’ve reached is Rs.4.5 a unit. But that includes the cost of land acquisition.With the government clearing the setting up of 40 GW of solar capacity by way of rooftop installations, expect solar installation costs to fall further.

With costs of batteries falling to 25% of their current costs, the chances of solar costs falling further will only accelerate. Marry this with the latest report from Bloomberg which suggests that battery costs could be just 10% of their existing costs by 2020. It then becomes obvious that solar tariffs will soon be just a fraction of those for thermal (or even nuclear) power offered through the grid. This poses a major problem. As solar prices fall, state governments will have to find new ways to retain households and industries using grid power. If states cannot get higher tariffs from industry, commercial establishments and relatively affluent households, how will they finance the (politically expedient) subsidies to farmer and EWS (economically weaker section) categories?

The only way states can do this is by offering solar power – even free of cost – to villages. The lower cost of solar will mean lower subsidies. Handled well, these solar plants could generate profits. But if state governments are not shown this route, through some sort of policy initiative, India might lose out on this opportunity.  Either way, expect decentralised, off-grid, cluster power to proliferate.

Finally, potential of waste to energy should not be underestimated. A study by this author showed that just human and animal excreta in India has the potential to generate methane worth Rs.150,000 core —without including agricultural and forest waste.  Informed sources say agri-and-forest waste can generate ten times the methane excreta can. Expect waste to energy plants to proliferate in cities and in villages.

Methane generation will help India reduce the impact of GHG (Green house gases). It also allows part of the dung to be re-used as manure. But most importantly, it can be used to supplement solar energy, both as a fuel and as a source of energy.   Methane does what CNG, or LPG, does. It can be used for both cooking and powering vehicles. Expect methane and solar to drive down India’s oil and coal import bills by at least 30%, and fertilizer costs to tumble by 20% by 2022.

The use of methane for cooking will help prevent denudation of forests for firewood. It will also reduce the exposure to fumes caused by burning firewood which will reduce respiratory ailments among the poorest.

In other words, there might be little need to worry about declining exports. So long as India’s imports decline faster, the country will enjoy a better balance of payments (BoP) and CAD (current account deficit). In fact, India’s reliance on export of goods will become less important than its export of services. 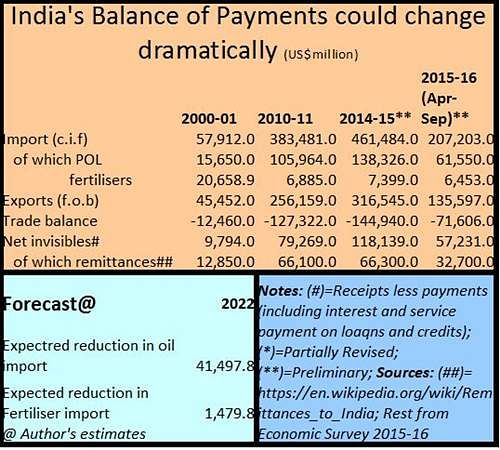 Remittances have grown from just around $12 billion at the turn of this century to $70 billion today.  True, almost 31% of total foreign remittances into India is from the Middle-East (29% from North America and 20% from Europe). With more renewable power the world over, the increasing use of electric cars, and the glut in oil and gas production, oil (and gas) producing countries will be adversely affected. That, in turn, could hit remittances badly.

India has one key advantage that most developed countries do not have. It has lots of people, hence households and houses. This resource can be harnessed by focusing on rooftop solar, methane generation and manpower exports, instead of just merchandise or commodity exports. If the government succeeds in exploiting the strategic advantages India enjoys, it can make India a formidable power house. Else, it will be faced with declining remittances, weaker merchandise exports, and increasing restlessness at home from an embittered and unemployed youth.

The choices are stark, the opportunities immense. The potential for ushering in far reaching changes is just round the corner. The big question is: will the government rise to the occasion.