New Delhi: A massive fire that broke out at the Bhalswa landfill site on Tuesday has not completely dozed off yet on Saturday.

Flames emerging from the site can still be seen as it continues to exhale the toxic air in the site surrounding.

So far, the Delhi Commission of Women (DCW) has summoned the North Municipal Corporation of Delhi (MCD) on May 4 to explain the steps taken by it to prevent poisonous fumes from entering the houses of residents living nearby the landfill area at Bhalswa.

#WATCH | Fire at the Bhalswa landfill site in Delhi is still not under control. A massive fire broke out at the landfill site on April 26th evening. pic.twitter.com/H6UKfyVaTz

The residents have informed the Commission that poisonous fumes generated due to fire are entering their homes which is severally affecting the health of all residents including the women and children in the area.

Earlier on Thursday, the Delhi government imposed a fine of Rs 50 lakh on the North Delhi Municipal Corporation in connection fire.

The Delhi Pollution Control Committee (DPCC) has submitted the report to the Environment Minister of Delhi.

According to the report, a matter of negligence from the MCD's side has come to the fore.

Delhi Environment Minister Gopal Rai has imposed a fine on DPCC on the basis of the investigation report.

According to Delhi Fire Service officials, smoke was reported around 5.00 pm on Tuesday that later spread into a massive fire.

Following the incident, locals living near the Bhalswa landfill in Delhi have been reporting breathing problems. 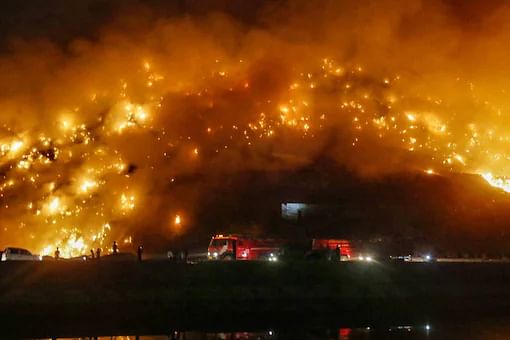