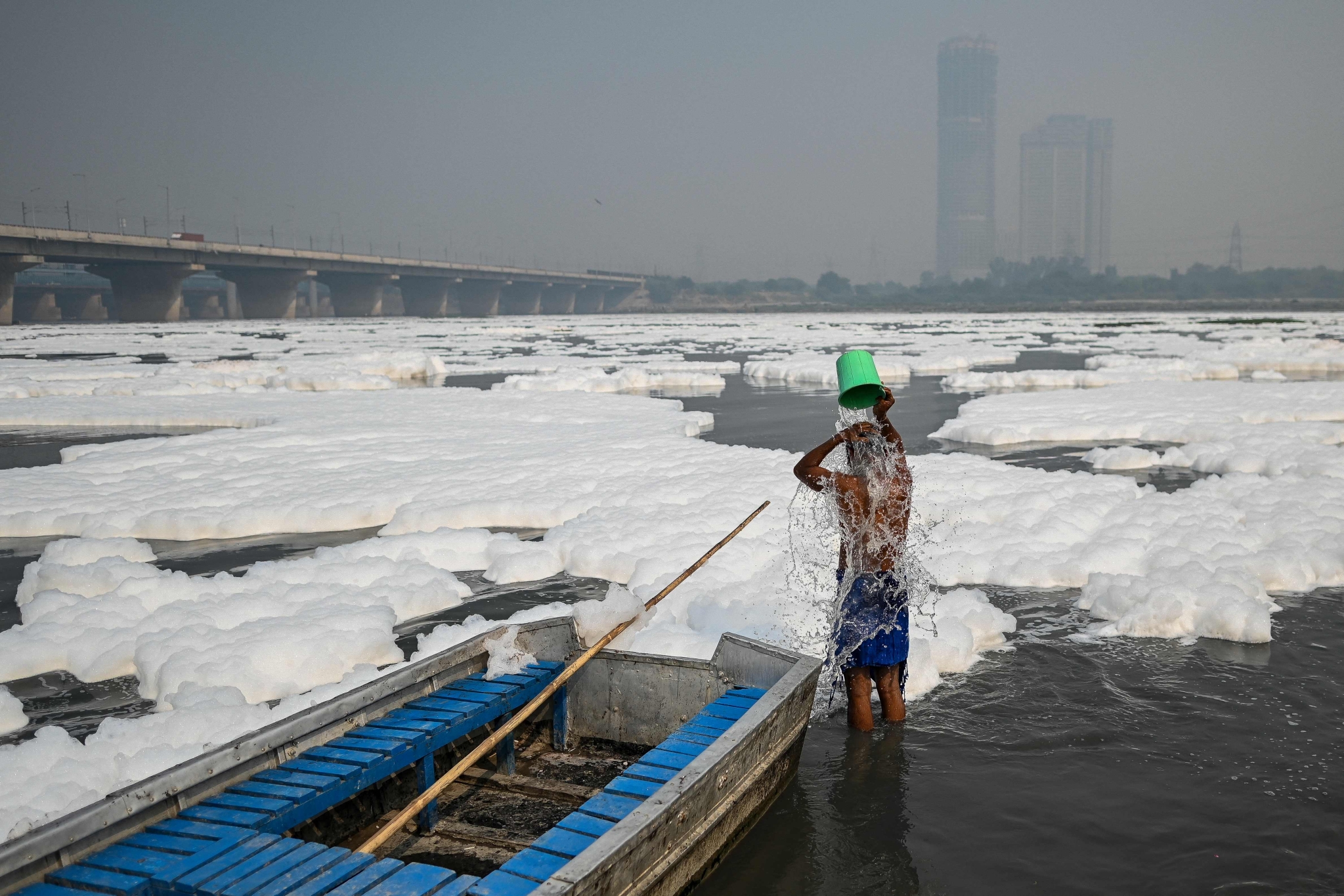 A man bathes in the waters of Yamuna river amid foam created by pollution in the water in New Delhi on November 8, 2021. | (Photo by Sajjad HUSSAIN / AFP)

New Delhi: A day after the Delhi government deployed 15 boats in River Yamuna to remove froth at Kalindi Kunj, civic agencies on Wednesday installed bamboo nets and sprinkled water to dissipate froth -- a sign of the river's hazardous water quality.

Officials have admitted that the problem of frothing will continue until sewage treatment plants in Delhi are upgraded to meet the new standards.

A Delhi Jal Board official said directions have been issued to sprinkle water to dissipate the froth as "no other short-term measures would work".

An official of the Irrigation and Flood Control Department said bamboo nets have been installed on the stretch at Kalindi Kunj to capture the froth.

These exercises will continue till effective action is ensured, the officials said.

The pollution in the Yamuna in Delhi is once again in focus as Chhath festivities are underway.

Early on Wednesday, a number of devotees had gathered at the Yamuna Ghat in Kalindi Kunj, downstream of the Okhla Barrage, but were dispersed by the police.

The Delhi Disaster Management Authority had earlier banned Chhath Puja celebrations on the banks of the Yamuna in view of the pandemic.

The city government has set up 800 makeshift ghats across Delhi for devotees to perform the rituals.

Vikas Rai, chairman of Chhath Puja Samiti, Kalindi Kunj, said the government wanted to "cover up its failure and that the devotees are not bothered about the froth in the river".

"Boats, nets and water sprinkling won't help. The froth will come back the minute you remove it. This is an eyewash so that the media doesn't criticise the government over the pollution," he said.

Facing criticism over the formation of froth in the Yamuna, the Delhi government had on Tuesday deployed 15 boats to remove the same.

The Delhi Pollution Control Committee (DPCC) conceived the plan and implemented it with the help of the Irrigation and Flood Control Department and Revenue Department, officials said.

They said the idea entailed the deployment of boats parallel to each other in order to remove the froth using ropes.

An official, however, termed it a "temporary" measure. "The problem will persist till sewage treatment plants in Delhi are upgraded to meet the new standards. There is no immediate solution to it." "The foam is just the manifestation of the water quality of the Yamuna and it is a long-term issue," he said.

According to experts, the primary reason behind the formation of foam in the Yamuna is high phosphate content in detergents used in dyeing industries, dhobi ghats and households in Delhi, Haryana and Uttar Pradesh.

Waste water from authorised colonies and settlements containing high phosphate content reach the river through untapped drains. When water falls from a height at a barrage, the turbulence agitates the phosphoric compounds in the river which leads to the formation of froth.

Frothing in certain stretches of the river, such as near ITO and Okhla Barrage, has become an annual phenomenon in winters when the temperatures are low and flow in the river is less.

On Monday, pictures and videos showing devotees offering prayers in the Yamuna on the occasion of Chhath Puja with froth on the river surface had triggered a political slugfest between the ruling AAP and the BJP in Delhi.

While the BJP leaders alleged that the AAP government did not allow Chhath celebrations on the Yamuna banks to hide the "pathetic" state of the river, AAP's Gopal Rai and Raghav Chadha blamed the governments in Uttar Pradesh and Haryana for the frothing in the river.

The 22-kilometre stretch of the Yamuna between Wazirabad and Okhla, which is less than two per cent of its total length of 1,370 kilometres from Yamunotri to Allahabad, accounts for around 80 per cent of the pollution load in the river.

The Delhi government had in June banned the sale, storage, transportation, and marketing of soaps and detergents not conforming to the latest BIS standards to curb the pollution in the river.

On an average, 24 out of the 35 STPs in the national capital did not meet the prescribed standards for waste water over the last one year, according to government data.

Of the 13 CETPs in industrial areas across Delhi, only six comply with the DPCC standards for wastewater on an average.

Delhi generates around 720 million gallons of waste water a day. The 35 STPs in 20 locations across Delhi can treat up to 597 MGD of sewage and have been utilising around 90 per cent of their capacity.

In January, the Delhi government had told the National Green Tribunal that the upgradation of STPs in Uttar Pradesh, Haryana and Delhi to "substantially" reduce foaming in the Yamuna will take three to five years, depending upon the availability of land and funds.

In a report submitted to the Union Jal Shakti Ministry in July, the Delhi government had said that the Yamuna cannot be deemed fit for bathing in the absence of a minimum environmental flow in the river.