The incident reportedly happened at Delhi's Don Bosco Technical institute where the students killed a pregnant dog on campus and later dragged her body away.

The Delhi Police have registered an First Information Report against students and staff of a South-east Delhi college for allegedly killing a pregnant dog on their campus.

The incident reportedly happened at Delhi's Don Bosco Technical institute where the students killed a pregnant dog on campus and later dragged her body away. 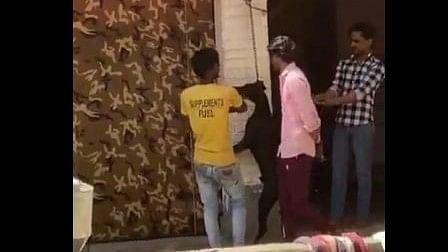 Gruesome videos of the same surfaced on social media following which FIR was filed at New Friends Colony Police Station. The news hit the headlines days after another angering video of three people killing a dog by hanging him surfaced from Ghaziabad.

The video of the horrific incident shows a group of students cornering the canine inside a tin shed on the institute's campus and an accused enters the same with what looks like a baseball bat. While in another video the group is seen dragging the canine's body across a lawn. The shocking incident was also reported by Street Dogs of Bombay, an animal activist group, on their Instagram handle.

Few boys from Don bosco technical institute, New Delhi ganged to kill a pregnant dog.
these morons hit her with sticks, dragged her in field after she died.
The boys can be clearly heard in the videos asking to “kill her” .
Alot of people recently were growling that dogs- pic.twitter.com/ik5zJFLyFJ

According to a report in Times of India, animal lover Lavita Powell wrote to former Minister and People for Animals activist Maneka Gandhi to take the matter up with the institute; she also called on all activists and urged them to write or email to college authorities.

Powell also wrote to Brother CJ Thomas saying that the brutality by "young minds is very disturbing". She also wrote that she was shocked to see they do not have remorse for the crime they committed and found the act entertaining.

"These crimes against animals are only increasing. There has to be some form of strict punishment given to the perpetrators and make them realise it is a crime under IPC Section 429. And this punishment needs to be publicised in the college campus, so that others will be cautioned that doing such acts are wrong, punishable and they will be punished as well," Powell wrote to Brother Thomas.

"To conclude, an awareness campaign against cruelty towards animals should be made compulsory in your institute and other chain of educational institutes of Don Bosco," she added saying that the perpetrators should be expelled immediately and sent for counselling.

News agency ANI quoted Ambika Shukla of PFA saying, "It is horrific to see such brutality by young students who can be seen laughing as they beat an expectant mother to death."

"Scientific studies have shown that cruelty against animals is dangerous because it escalates to violence against women and children. With time, the high of abusing a defenceless animal dissipates and to impose their power, such abusers, then prey on women and children," she added.