Who doesn’t love Ravindra Jadeja? On his 33rd birthday, let's look at three of his memorable performances

Ravindra Jadeja came in to bat at number 7, and along with Virat Kohli scrapped the team to 129. The left-hander scored a vital 33* off 25 balls including eight runs from the last two balls to give India a mental edge against England as the teams left the field.

Jadeja picked up two crucial wickets and was superb in the field too, earning himself the Man of the Match award for his all-round display. The numbers weren’t impressive, but the impact by the bat in a final turned out to be vital for India.

He also ended the tournament as the leading wicket-taker; with 12 wickets in 5 matches at an average of 12.83. 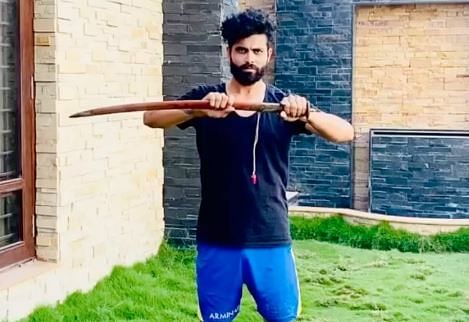 Jadeja celebrates his milestones with a unique blade-brandishing exercise, swooshing the bat like a sword, much like the Rajputana customs | File Photo

Jadeja’s coming of age moment as a Test all-rounder came against England in 2014, scoring his first Test fifty.

At 202-5, India needed a final push and in came Jadeja. His enterprising 68 swung the match towards India, and with Ishant Sharma’s 7-for, India managed to claim a memorable victory at Lord’s.

Jadeja celebrated his fifty with a unique blade-brandishing exercise, swooshing the bat like a sword, much like the Rajputana customs that he has grown up in.

Getting back at Sanjay Manjrekar: India vs NZ , ICC WC semifinal 2019

The India lost the match, the semifinal of the 2019 World Cup against New Zealand is often known will never be forgotten. Bowling first, Jadeja had the best bowling figures in the team – 1/34 in 10 overs – and also inflicted a crucial run-out of Ross Taylor.

Then came Jadeja’s innings. India was in deep trouble at 92/6. Jadeja came in and launched a counter-attack on the Kiwi bowlers. He built a partnership with MS Dhoni and made a quick 59-ball 77.

After completing his half-century and his sword celebration, the left-hander gestured towards the commentary box to Sanjay Manjrekar, who had been critical of Jadeja’s place in the eleven with his ‘bits and pieces’ jibe. India lost the game though.