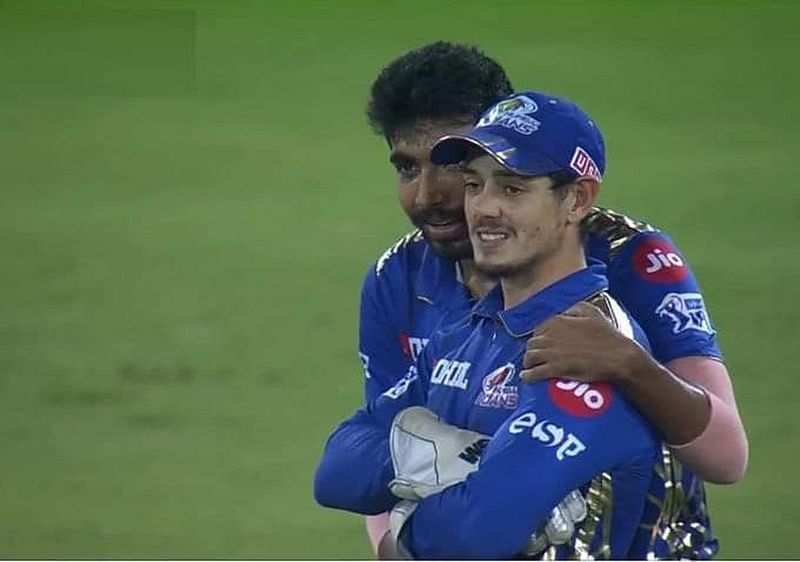 Jasprit Bumrah is not just a top class pace bowler, he is also someone with a lot of sportsman spirit. An example of this was seen yesterday during the IPL 2019 final between Chennai Super Kings and Mumbai Indians. During the penultimate over, Bumrah did not get angry on wicket-keeper Quinton De Kock after he missed to grab an easy delivery which went for a four. On the other hand, Bumrah consoled him by giving him a hug.

The event occurred when Bumrah stuck to some tight bowling in the 19th over, after CSK needed 18 off the last two overs. Bumrah went well with the first five balls, giving out just 5 runs. On the 5th ball, he even managed to dismiss Dwayne Bravo through catch. When Ravindra Jadeja arrived to play the final ball, with CSK needing 13 off 7 balls, Bumrah bowled a back of a length delivery. The left-handed batsman could not understand the ball and missed it, however, even De Kock missed to catch the ball properly. The ball hit his gloves and went back to the boundary in byes, erupting a huge noise among the crowd.

While we can assume that Mumbai Indians fans would have been very angry due to the event and some may have also criticised the South African youngster just after his fault, Bumrah came with a very kind gesture. He didn’t lash out at him, did not even argued with him. Rather he put his hands over his shoulders and smiled, consoling him that it’s okay.  Even people watching the match found the gesture very pleasing and applauded Bumrah for his sportsman spirit. Have a look at some of the tweets praising Bumrah.

My respect for Bumrah just went up enormously. After that shot of his conversation with de Kock.

All class from Bumrah. To actually console De Kock despite that lapse at that stage.

Brilliant calmness under pressure from Mumbai. Bumrah’s gesture when De Kock missed the last ball and it went for 4 Byes showed his maturity and calmness and Rohit also handled the pressure extremely well. Well tried Chennai. But congratulations Mumbai on a 4th title #MIvCSK

Jasprit Bumrah (2/14) was absolutely amazing on the night of the finals.
Never the one to use expletives on the field he showed his class when Rahul Chahar dropped Watson’s catch. Bumrah smiled. When de Kock conceded 4byes went up to him and consoled. Class#IPLFinal

Massive respects to bumrah
best moment of the match when Bumrah goes tand talks to De Kock after he failed to collect that ball of jadeja.. Bumrah is gem of a person. #IPL2019Final #MIvCSK #OneFamily @Jaspritbumrah93 you beauty man .. @QuinnyDeKock69 well done champ 💙💙 pic.twitter.com/C1J6qLtRuq

If you’re a young player and looking at Bumrah as an idol, don’t just look at his bowling. Look closely at his reaction to De Kock and Chahar’s slip ups. It’s not just the game you play, it’s how you play the game 🙌

For me this was the best moment of the entire #IPL2019 . With the trophy on line , Quinton de Kock lets one through and it races to the fence . A distraught de Kock thought he had spilled the cup. Jasprit Bumrah the bowler walks up to him and puts an arm around .