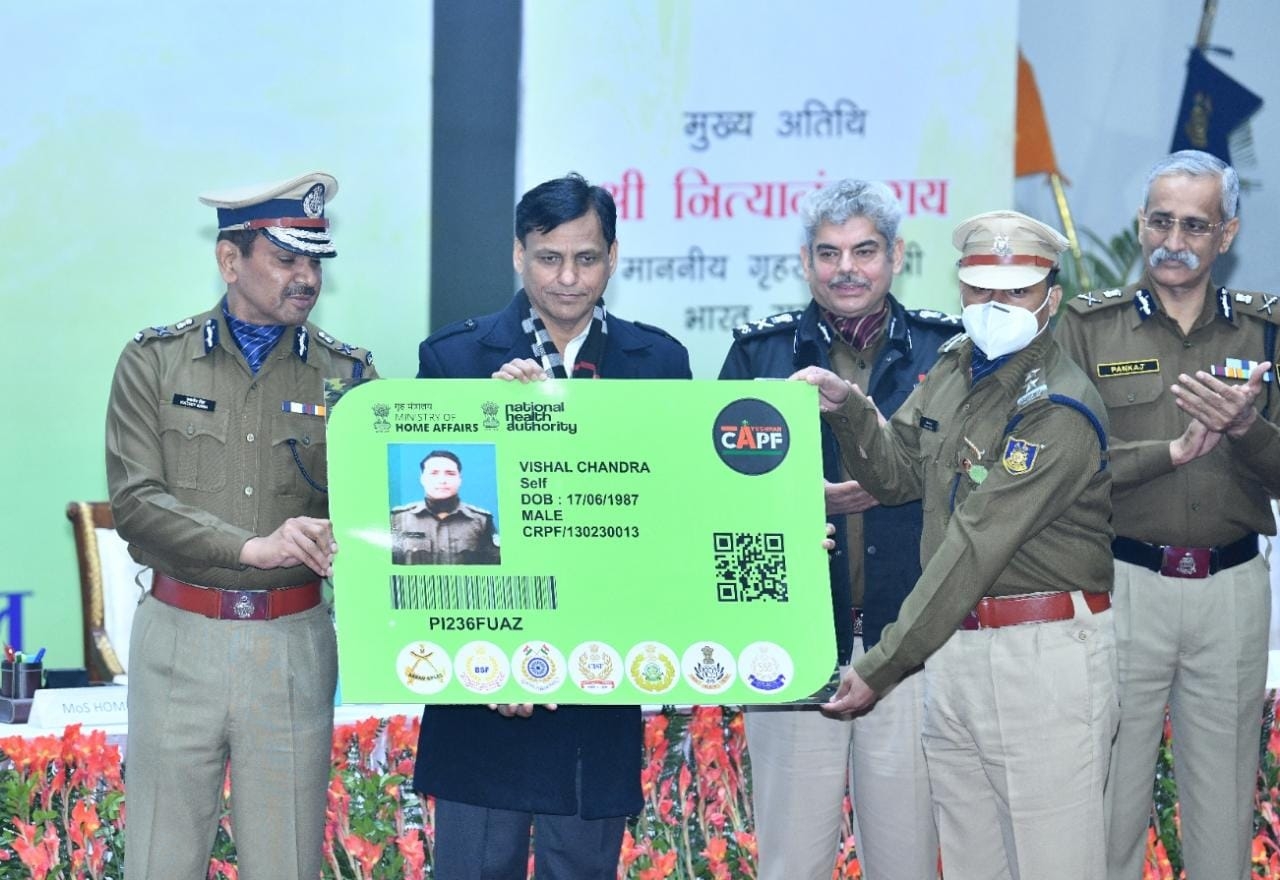 Union Minister of State for Home, Nityanand Rai distributed Ayushman CAPF cards to the last 10 personnel of each Central Armed Police Force in New Delhi on January 5. Director Generals of all Central Armed Police Forces, top officials of the Union Home Ministry and personnel of Armed Police Forces were present on the occasion. In his address on the occasion, the Union Minister of State for Home said that the Pradhan Mantri Jan Arogya Yojana / Ayushman Bharat Yojana was launched on 23rd September, 2018 by the Prime Minister, Narendra Modi. Thereafter, this scheme was inaugurated for all personnel of Central Para Military Forces and their families at Group Centre, CRPF, Guwahati (Assam) on 23rd January, 2021 on the historic occasion of the 125th birth anniversary of Netaji Subhas Chandra Bose, by Amit Shah. Under this scheme, Ayushman CAPF cards have been distributed to 35 lakh CAPF personnel and their families in record time.

The Union Minister of State for Home said that the distribution of Ayushman cards was launched by the Union Home Minister Amit Shah on 2nd November, 2021 and by 31st December, 2021, almost all the cards were distributed to the personnel of the Forces and their families. He said that ensuring health and welfare of our Jawans and their families is the top priority of the Modi government. He said that the Central Armed Police Forces fully cooperate in border security, internal security, dealing with the problem of terrorism, Naxalism, extremism, law and order in the states and elections.

Nityanand Rai said that earlier, medical consultations and tests were available only in Force hospitals or other government hospitals or CGHS empaneled hospitals. But now under this scheme, medical facilities will be available on a cashless basis in about 24,000 empaneled hospitals of Ayushman Bharat PM-JAY and there is no limit on the expenditure incurred in this scheme. It will now become much easier for the kin of personnel of various forces who live in remote areas of the country to get treatment. Rai said that this scheme will prove to be a milestone in the direction of a healthy and long life of the personnel of our Armed Police Forces and their family members.

Nityanand Rai said that CAPF personnel and their family members can now avail cashless, in-patient and out-patient health facilities in all hospitals empaneled under the CGHS or Ayushman Bharat PM-JAY. All India rollout of Ayushman CAPF is planned to be completed by 31st March 2022. The scheme is a joint initiative of the Union Ministry of Home Affairs and the Ministry of Health and Family Welfare and the National Health Authority (NHA).

The NHA will provide seamless services to the CAPF beneficiaries and has put in place suitable mechanism with a special Toll Free Helpline Number 14588, an online complaint management system and a strict control mechanism for fraud detection and prevention.