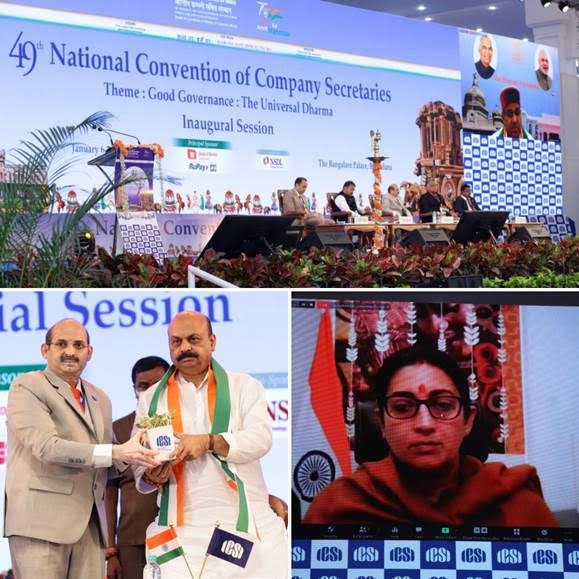 The 49th National Convention of Company Secretaries was inaugurated on 6th January, 2022, at The Bangalore Palace, Bengaluru, on the theme “Good Governance: The Universal Dharma” in the august presence of Thaawarchand Gehlot, Governor, Karnataka as the Chief Guest, Basavaraj Bommai, Chief Minister, Karnataka as the Guest of Honour and Smriti Zubin Irani, Minister, Ministry of Women & Child Development, Government of India, as Special Guest.

While emphasising on the “minimum government and maximum governance” initiative of the Government of India, Thaawarchand Gehlot, appreciated the efforts of the ICSI and said “the Institute has always been at the forefront in making governance standards more relevant and stronger for promoting good governance in India”.

Basavaraj Bommai, said “ICSI is one of the pillars that would change the face of the Indian economy by driving growth in India Inc.” He gave a call for action to all Company Secretaries, who are directly related to the common man, to have a say in not just the affairs of a Company but also in making Economic Policies for the country.

Reminiscing her previous dialogue with the ICSI, Smriti Zubin Irani, said “I am grateful that my request of having more women into this profession has been reflected upon. Company Secretaries are the adept administrators of the country who will have to fuel research and innovation beyond their organisations for building a robust economy”

A number of ICSI publications were also released at the hands of Chief Minister, Karnataka, on the occasion.

Humbled with all the acknowledgement and adulation, CS Nagendra D. Rao, President the ICSI, in his address spoke about how the ICSI, having a global and modern approach in its vision, is always sourcing its inspiration of following the righteous path, from the ancient scriptures. The theme has been chosen to reaffirm the enhanced scope of work for Company Secretaries in the area of Governance, by not limiting it within the ambit of just an organisation.