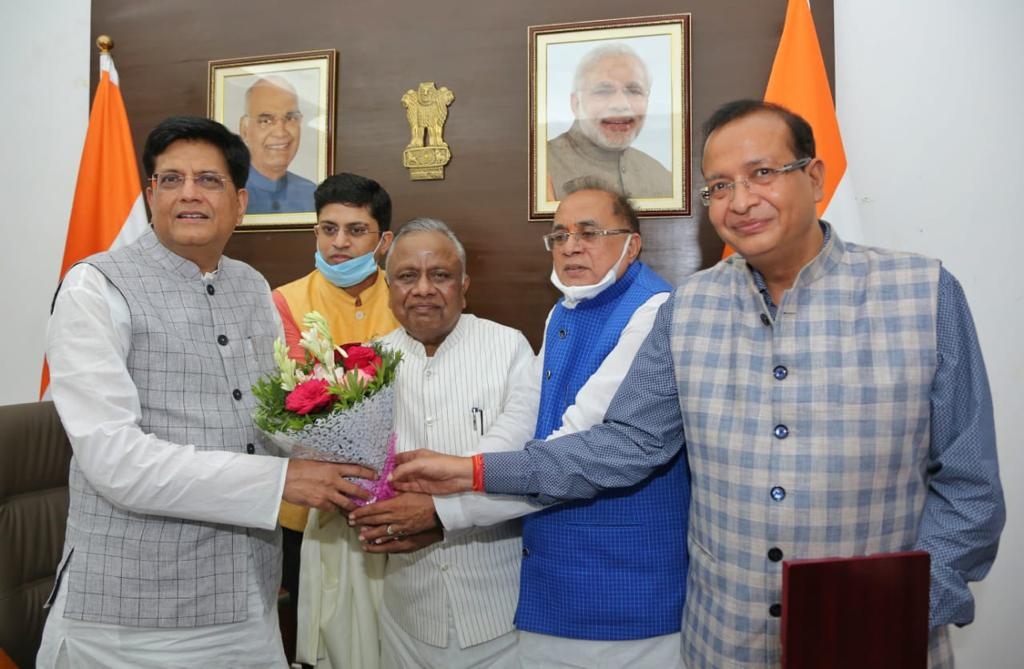 The Bharatiya Udyog Vyapar Mandal organized National Traders’ Day at the Constitution Club in the national capital. On this occasion, Chief Guest Union Minister of Commerce and Industry Piyush Goyal while addressing the function virtually, said that the government's vision of self-reliance and Make in India fosters develop small scale industries, retail and wholesale business in India. MP Hema Malini, inaugurated the meeting by lighting the lamp. The program was presided over by Ravikant Garg, National President, Bharatiya Udyog Vyapar Mandal.

Minister of Commerce and Industry addressed the traders virtually on National Traders’ Day. He said, “The Prime Minister is concerned about promoting and facilitating Indian small scale industries and traders. The traders community of the country has really made a remarkable contribution in this time of crises to keep the country's economy smooth. Congratulating everyone, he said that in true sense this National Traders' Day is a day to honour the talent, courage and pride of traders. He congratulated the traders community on the completion of 40 years of the Bharatiya Udyog Vyapar Mandal. He said that after the establishment of Bharatiya Udyog Vyapar Mandal on 9th August 1981, the manner in which the BUVM has served the traders in the last 40 years is commendable in itself. In order to take the country to the heights of development and to take advantage of the opportunity in the disaster, the government has decided to provide facilities to the wholesale and retail business same as micro and small scale industries. The business world should go ahead and take advantage of these facilities and contribute to add a new chapter in the progress of the country. To make the country a superpower, the Prime Minister has dreamed of a 5 trillion economy. In fulfilling this, all sections should join and contribute. Without the progress of industry and trade, a strong India cannot be imagined. In future, MSME’s and the business world should be ready to play their role actively in this direction by becoming Vocal for Local.

MP Hema Malini, said, “Today is a very special day for all the traders of the country who have been working continuously for many years for the progress of India. We are proud that the businessmen have worked for the interest of the country in any case. Even during the Corona epidemic, businessmen have done a remarkable services for the betterment of the citizens across the country. Be it medicine, ration, feeding the people suffering from hunger, this effort of the traders is less appreciated. Today, due to the hard work and cooperation of traders, the country's economy is rapidly returning on track. To fulfill the vision of self-reliant India, the business world will have to come forward together with the government. He said, “We are confident that the traders will continue to work diligently and hard to fulfill the Prime Minister's dream of a self-reliant India. Let us pledge that we will definitely make India a country of 5 trillion economy. He ended his address with "Bharat Mata Ki Jai".

During the address of Union Minister Piyush Goyal, National Chairman of Bharatiya Udyog Vyapar Mandal Balkisan Agarwal presented 3 points for amendment in the provisions of the GST tax system.

*If there is any shortcoming, the license applicant should be informed immediately and in one stroke from the portal

*If there is any shortcoming in the return, then provision for revision should be made for the traders.

The Union Minister assured the community to take proper decisions on these subjects.

Ravikant Garg, National President of Bharatiya Udyog Vyapar Mandal said that during the rule of former Prime Minister Atal Bihari Vajpayee, traders and Arhtiyas got rid of the corrupt Inspector Raj, but the provisions of the Essential Commodities Act have been abolished. Again traders are being oppressed and harassed by using it. The government should pay attention in this regard. A ten-point demand letter was given to the Prime Minister Narendra Modi ji through the Union Minister and MP to solve the problems related to the traders.

While conducting the program and expressing gratitude, National Senior General Secretary, Gopal Mor said that we express our gratitude on behalf of the traders world for giving micro small and medium enterprises status to the wholesale and retail trade. The National Treasurer Jagdish Beriwal and other dignitaries were also present at the event.