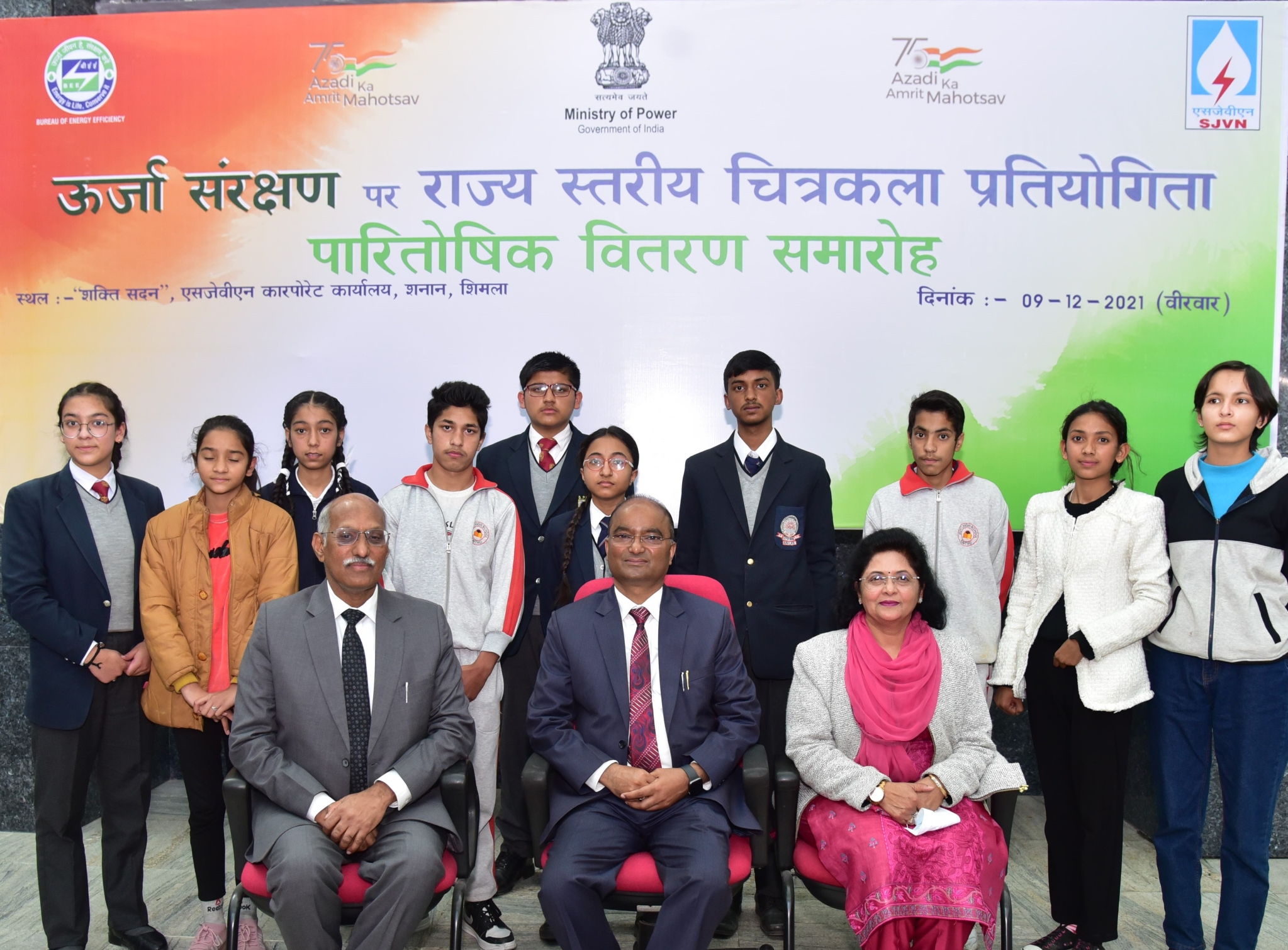 A prize distribution function of State Level Painting Competition on Energy Conservation was held today at Corporate Office of SJVN. Nand Lal Sharma, Chairman & Managing Director, SJVN was the Chief Guest of the function. The Function was also graced by Geeta Kapur, Director (Personnel), S.P. Bansal, Director (Civil) along with other senior officers of SJVN.

For this year the main theme of the painting competition was “Azadi Ka Amrut Mahotsav”, with a focus on ‘Energy Efficient India” and ‘Cleaner Planet’. In this year’s competition around 1000 students participated.

Ms Arpita Thakur and Ms Arushi Attri won the first prize of Rs 50,000 each in both the Groups, while Rudransh Jindal and Ayush Kumar won the Second prizes of Rs 30,000. While third prizes of Rs 20,000 each were bagged by Aakriti Shandil and Kapil. Ten Consolation prizes of Rs. 7,500 each for both Groups were also awarded.

Speaking during the prize distribution, Sh Nand Lal Sharma said: “I am pleased with the overwhelming response to the painting competition organized by SJVN. It is encouraging to see young artists express themselves freely and create works that make us admire as well as think about energy and environmental protection. Art plays a pivotal role in our lives and is connected to every aspect of humanity. My heartiest congratulations to the winners as well as all participants for their talent and creative spirit.”

Online registration for the competition opened on November 01, 2021, and all schools in the State were invited to participate. Geeta Kapur, Director (Personnel) informed that the competition was organized at three locations i.e. Shimla, Jhakri and Hamirpur.

The top three paintings from each group will compete for the National Level Prizes and winners will be selected out of the paintings drawn by students in the State Level Competitions. The First Prize in the National Level Painting Competition is Rs 1,00,000 each for both Groups, while the Second and Third prizes will be Rs 50,000 and Rs 30,000 each respectively. In addition, there will be 10 Consolation prizes of Rs 15,000 each for both Groups.

SJVN is the Nodal Agency for organizing the painting competition at the State level in Himachal Pradesh since 2004. The competition being organized by SJVN is an exemplary effort to provide a platform to students to showcase their creativity and also make them aware of energy conservation.