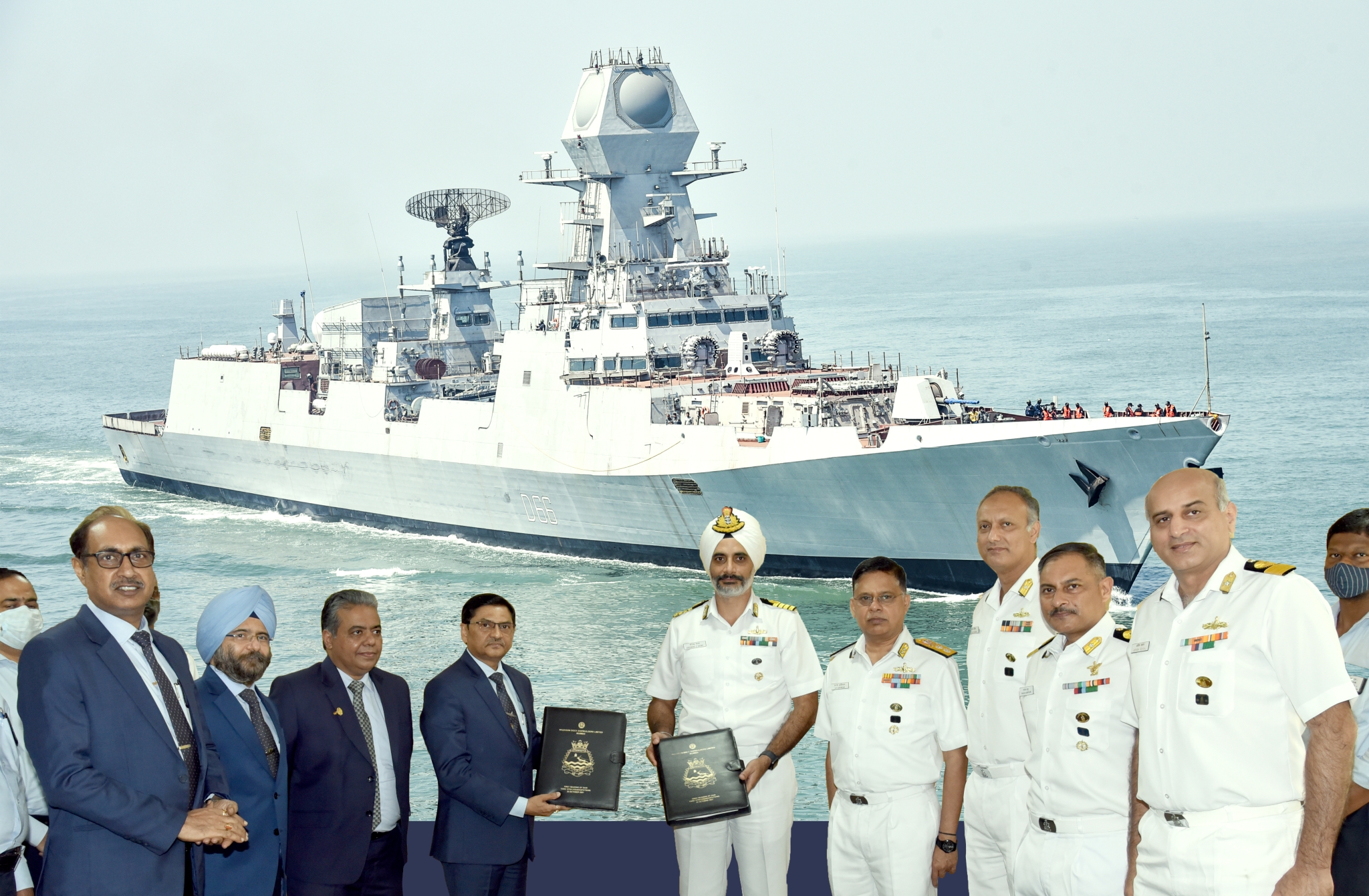 The ship is constructed using Indigenous Steel DMR 249A and is amongst the largest Destroyers constructed in India, with an overall length of 164 meters and a displacement of over 7500 tons. The ship is a potent platform capable of undertaking a variety of tasks and missions, spanning the full spectrum of maritime warfare. It is armed with supersonic Surface-to-Surface ‘Brahmos’ missiles and ‘Barak-8’ Long Range Surface to Air Missiles. Towards undersea warfare capability, the Destroyer is fitted with indigenously developed anti-submarine weapons and sensors, prominently the Hull mounted Sonar Humsa NG, Heavy weight Torpedo Tube Launchers and Rocket Launchers.

Significantly more versatile than the previous Destroyer and Frigates in Naval inventory, the Visakhapatnam’s all round capability against enemy submarines, surface warships, anti-ship missiles and fighter aircraft will enable it to operate without a bevy of supporting vessels, and also to function as the flagship of a Naval task force.

The ship can accommodate a crew of 312 persons, has an endurance of 4000 Nautical Mile and can carry out a typical 42 days mission with extended mission time in out of area operation. The ship is equipped with two helicopters onboard to further extend its reach. The ship is propelled by a powerful Combined Gas and Gas Propulsion Plant (COGAG), consisting of four reversible Gas Turbines, which enables her to achieve a speed of over 30 knots (approx 55 Kmph). The Ship Boasts of a very high level of automation with sophisticated digital networks such as Gigabyte Ethernet based Ship Data Network (GESDN), Combat Management System (CMS), Automatic Power Management System (APMS) and Integrated Platform Management System (IPMS).

The indigenous content in P15B Class destroyers is 72% which is a notch above their predecessors P15A (59%) and P15 (42%) Class Destroyers, reaffirming the Government focus in Make in India Programme.

The Second Ship of P15B Mormugao was launched on 17 Sep 16 and is being readied for Harbour Trials. The ship will thereafter commence its Sea Trials. The third ship (Imphal) was launched on 20 Apr 2019 and is at an advance stage of outfitting. The fourth ship is under block erection and will be launched within this Current Financial Year.

MDL has always been at the forefront of the nation’s progressive indigenous warship and submarine building programme. With the construction of the Leander and Godavari class frigates, Khukri class Corvettes, Missile Boats, Delhi and Kolkata class Destroyers, Shivalik class Stealth Frigates, the SSK submarines and the three Scorpene submarine under its belt, the history of modern day MDL almost maps the history of indigenous warship and submarine building in India thereby deservedly earning the soubriquet ‘Warship and Submarine Builders to the Nation’.