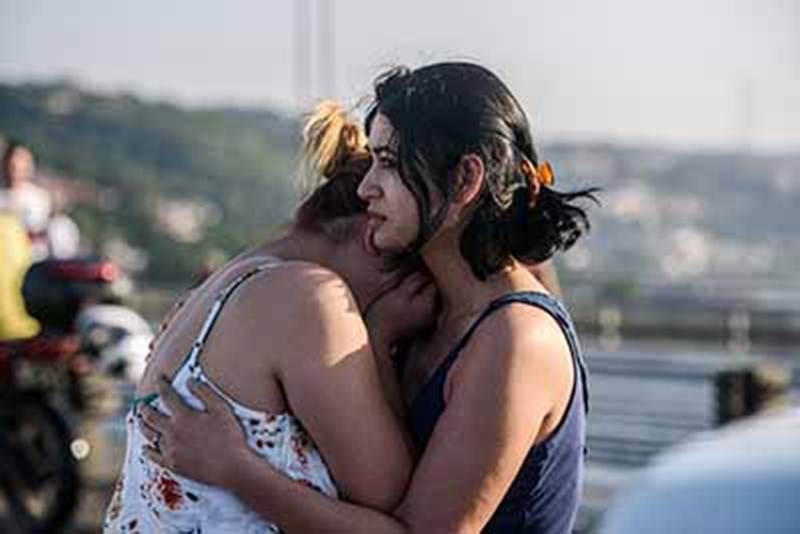 Women react after people took over military position on the Bosphorus bridge in Istanbul on July 16, 2016. The number of dead from a coup attempt in Turkey has risen to 90, the state-run news agency Anadolu reported on July 16, 2016, adding that 1,154 people were wounded. Nearly 200 unarmed soldiers at the Turkish military headquarters have meanwhile surrendered, an official said, adding that special troops were currently securing the complex. / AFP PHOTO / OZAN KOSE |

US advises support for elected government, while Iran calls for unity

Washington/Doha: The US has thrown its weight behind the democratically-elected government in Turkey amidst reports of a military coup in the country which is a key NATO-ally of America.

US President Barack Obama spoke over phone with his Secretary of State John Kerry to discuss the unfolding events in Turkey. “The President and Secretary agreed that all parties in Turkey should support the democratically-elected Government of Turkey, show restraint, and avoid any violence or bloodshed,” the White House said in a statement.

In a statement, Kerry said the US viewed with “gravest concern” events taking place in Turkey. “I spoke this evening to Foreign Minister Cavusoglu and emphasised the United States’ absolute support for Turkey’s democratically-elected, civilian government and democratic institutions,” Kerry said. He urged all parties to ensure the safety of diplomatic missions and personnel and civilians throughout Turkey. NATO Secretary General Jens Stolenberg said he had also spoken to the Turkish foreign minister MevlutCavusoglu. “I am following events in Turkey closely and with concern. I call for calm and restraint, and full respect for Turkey’s democratic institutions and its constitution. Turkey is a valued NATO Ally,” he said.  The Pentagon said it was monitoring the situation in Turkey.

Iranian Foreign Minister Mohammad Javad Zarif spoke with his Turkish counterpart three times since the crisis began. On Twitter, he hailed the Turkish people’s “defence of democracy & their elected government” which he said “proves that coups have no place in our region and are doomed to fail.” “Deeply concerned about the crisis in Turkey,” Zarif tweeted. “Stability, democracy & safety of Turkish people are paramount. Unity & prudence are imperative.”

Israel, which last month approved a deal to restore ties frozen after a deadly Israeli raid on a Gaza-bound Turkish ship in 2010, also condemned the coup attempt.

“Israel respects the democratic process in Turkey and looks forward to the continuation of the reconciliation process between Turkey and Israel,” said foreign ministry spokesman Emmanuel Nahshon.

With the exception of Qatar, Iran’s Arab foes in the Gulf made no comment on the events in Turkey besides advising their citizens to stay off the streets. In a telephone call with the Turkish leader, Qatari emir Sheikh Tamim bin Hamad al-Thani “congratulated (Erdogan) on the support of the people of Turkey on his rule against the failed military coup,” the official QNA news agency reported.

Sheikh Tamim “strongly condemned this failed attempt and voiced… (Qatar’s) solidarity with Turkey… in all measures it takes to protect constitutional legitimacy, enforce the rule of law and preserve its security and stability.” Gas-rich Qatar is Erdogan’s closest Gulf ally, sharing his sympathies for the Muslim Brotherhood that formerly ruled Egypt and which is outlawed in other Gulf Arab states. Gaza’s Islamist Hamas rulers, who have friendly ties with Qatar as well as Turkey’s ruling Islamic-rooted AKP party “condemned the failed coup attempt” and “congratulated the people and the Turkish leadership for successfully protecting democracy.”