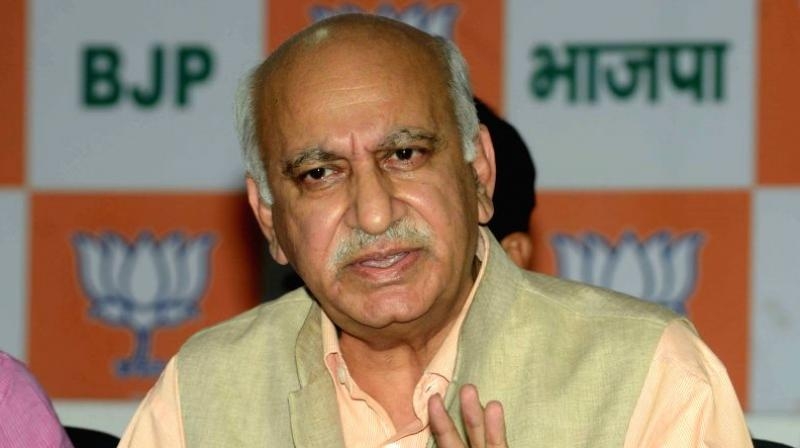 New Delhi: A panel of female journalists has written to President Ram Nath Kovind demanding the dismissal of Union Minister M.J. Akbar who has been accused of sexual harassment by a dozen women in the wake of the #MeToo movement.

“We are extremely concerned that he continues to be a minister in the Union council of ministers even as he pursues whatever legal course of action he plans. “You will agree this is highly unethical and improper and would cast a cloud over any investigation of his alleged misdeeds, besides undermining the independence, justice and fair play that any citizen can expect from such proceedings,” the Network of Women in Media in India (NWMI) said in the letter to the President on Monday.

Akbar, the Minister of State (MoS) for External Affairs, has sued the woman who had first named him in the #MeToo campaign — journalist Priya Ramani, for defamation. NWMI said that a criminal defamation charge is “a clear attempt to bully, intimidate and silence those who are bringing to light systemic abuse of women by men in powerful positions”.

“It is designed to push women back into silent compliance and will silence the voices of the many who have not yet spoken up,” it said. The panel demanded that Akbar should submit himself to an independent investigation and that the Ministry of External Affairs should ask him to step down from office pending investigation.

Requesting that the case against Ramani be dropped, the panel wrote: “We would like to point out that Section 499 of the IPC (Indian Penal Code), which pertains to defamation, cites exceptions in case of ‘imputation of truth which public good requires to be made or published’.”

It said that all support should be extended by the government to women in their struggle for justice and that Union Minister for External Affairs Sushma Swaraj should “take workplace harassment seriously and not encourage intimidatory tactics against women who have complained”.