Beed district’s Jagar Pratishthan takes up women’s issues, fights for their rights and justice, trains them and helps them become financially empowered. Nidhi Gupta speaks with its founder, Manisha Tokale

One doesn’t need to be old in the system to do good work… it’s the intention that’s the most important. And that holds true for Manisha Tokale and her NGO, Jagar Pratishthan.

Manisha Tokle was baffled with the caste discrimination she witnessed due to her close association with a family from a scheduled tribein Maharashtra. As she read about Jyotiba Phule and Babasaheb Ambedkar in school, she became more and more aware of this social menace practised by the upper caste communities. So strong was her determination to sensitise people about it, that along with a few women, she formed Jagar Pratishthan, an NGO, in Beed that raises voice against injustice.

The NGO works in the area of gender sensitization, and trains men and women towards better social compatibility. It is also active in child and educational development, and women leadership and takes up issues of atrocities on Dalits. Jagar Pratishthan is spread across 200 villages in Beed district of Maharashtra. 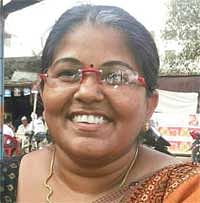 The NGO focuses on women’s issues and their upliftment. Its members train women in communication skills and legal matters, and in ways to respond to disastrous situations, crisis or conflict. It is active in facilitating methods of income generation and livelihood. “We also have Self Help Groups through which women are encouraged to take loan to start their own business and secure their lives,” saysManisha. The Pratishthan also helps landless Dalit and marginalized farmers and women in fighting for their land rights. Through its advocacy programs, it works towards assigning the names landless villagers to the lands instead of holding it up for animal grazing.“After all, human beings too need a shelter for themselves and their families and someone needs to address their issues too, along with the issues of grazing land for animals”, says the Founder.

Getting justice for rape victims is an issue Jagar Pratishthan takes up very strongly. One of its major achievements is encouraging the victims to talk about their ordeal in public and getting severe punishment for the rapists. These efforts restore confidence in the victims as they are made to understand that they were not responsible for the crimes that were committed against them. “This helps them work with their head held high. We tell them they cannot mar their lives for a crime they were not responsible for. Getting  sentences of seven to 10 years imprisonment for rapists has been a big achievement for us”, she says.

In a short span, the NGO has gained credibility because of its focused approach and proper implementation strategies. The belief is that if the women are educated, they will speak up against social and domestic violence, and gender based discrimination. Educated women will also work towards eradication of such social menaces in order to help women live in dignity. Hence, women’s education is a priority with the NGO.

Human beings too need a shelter for themselves and their families and someone needs to address their issues too, along with the issues of grazing land for animals.