Woman, teenager blow themselves up during police raid in Dhaka 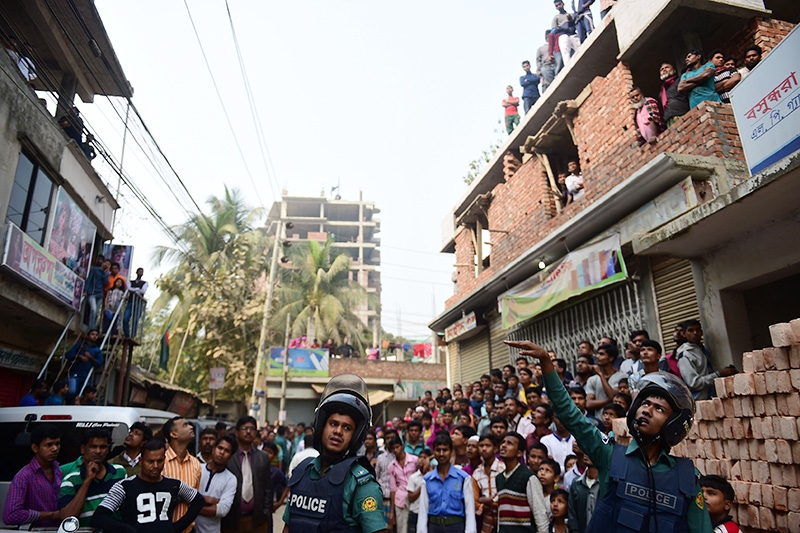 Bangladesh police officials stand alert as bystanders gather at the scene of an operation to storm an alleged militant hideout in Dhaka on December 24, 2016, as a team from the counterterrorism unit of Dhaka Metropolitan Police cordoned off a three-storey building in the capital. / AFP PHOTO / MUNIR UZ ZAMAN |

Dhaka : A woman and a teenage boy blew themselves up in the national capital when Bangladesh police’s elite counter-terrorism unit raided their three-storey building where heavily-armed militants, belonging to an Islamist group blamed for the deadly cafe attack, were hiding. Police raided the building in Ashkona area of the capital, reports PTI.

Home Minister Asaduzzaman Khan Kamal told the media that a woman and a teenage boy have blown themselves up.

Earlier four persons, including two woman and as many children, came out of the building and surrendered to law enforcers, bdnews reported. A minor girl, who suffered splinter injuries when the woman killed herself, has been taken to the hospital.       Sounds of several explosions and gunshots were heard in the areas since afternoon. Law enforcers lobbed several rounds of tear gas canisters targeting the building after the blast, reports our staff correspondent covering the raid from the spot.

“The inmates have vowed to fight us with grenades… we are repeatedly asking them to give up,” Dhaka’s police commissioner Asaduzzaman Mian told reporters. Police said the militants are believed to be the operatives of neo-Jamaatun Mujahideen Bangladesh (neo-JMB) which was behind the July 1 terror attack on the Dhaka cafe in which 22 people, including 17 foreigners, were killed.

Another official at the scene said one of the two women who surrendered was the wife of a slain renegade ex-army major who was killed on September 2 this year in a police encounter during a nearly identical raid at Dhaka’s Mirpur area. The other woman was the wife of a neo-JMB leader.