Will Brazil make Serbs dance to the samba beat? 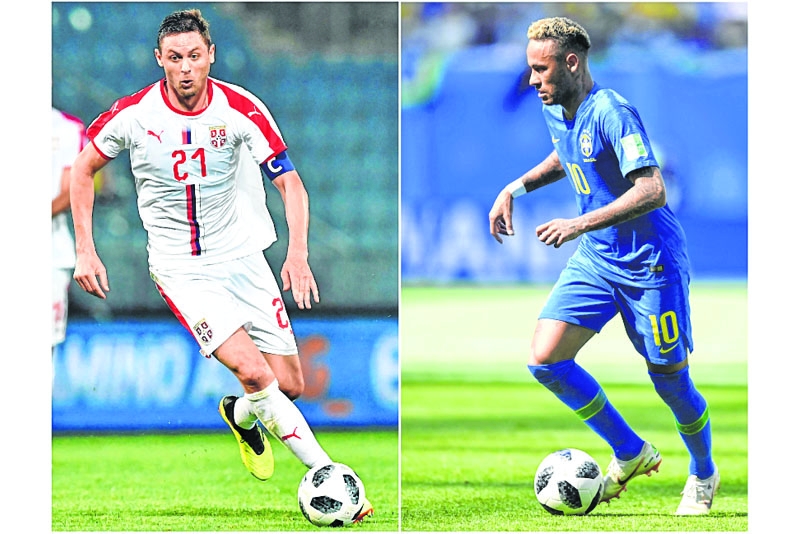 Sochi : Brazil will look to build on their morale-boosting 2-0 win over Costa Rica and seal a berth in the knockout stages when they take the field in their final Group ‘E’ match here on Wednesday. Brazil need just a draw to secure qualification for the last 16.

For Serbia, a win would guarantee their progress although a draw could see them through if Switzerland lose to Costa Rica by more than one goal in the other group game.

Pre-tournament favourites Brazil haven’t been at their best in the first two games, playing out a 1-1 draw against the Swiss and having to wait until injury time to finally secure the goals and the win against Costa Rica.

Although the manner of victory should give them a lot of confidence, coach Tite will know they need to up their game in all departments, more so with the talent in their ranks. Brazil are expected to be unchanged from the side that beat Costa Rica.

The onus will again be on Neymar to lead a bunch of excellent footballers to a triumph. The five-time World Cup winners’ most expensive player in the world has not lived up to the hype and broke down in tears after the last-gasp win the other day.

Serbia, meanwhile, are coming into the game on the back of a deflating 1-2 loss to Switzerland. Serbia were leading for much of the first half courtesy Aleksandar Mitrovic’s goal in the fifth minute.

But twin strikes from Granit Xhaka and Xherdan Shaqiri took the game away from them. They will have to lift their game by few notches against Brazil who have the likes of Phillipe Coutinho and Gabriel Jesus to cause more than worry.

Mladen Krstajic’s Serbia have strength but are not one of the quicker sides in the competition, a shortcoming that ultimately cost them the match against the Swiss. Mitrovic’s aerial quality is a reason Serbia can be confident. His performance will be just one of the reasons why they will go into their final group match against Brazil with hope.

Brazil’s defeats to the Balkan side came against the old Yugoslavia in 1930 and 1934.

COACH: Adenor Leonardo Bacchi, commonly known as Tite, ended his career due successive knee injuries that caused him to lose mobility in one of the knees.

COACH: Mladen Krstajic became one of the best defenders in the Bundesliga at Werder Bremen, winning the German championship and the cup with Werder in 2004.