Who are Urban Naxals? Read Vivek Agnihotri’s book to find out 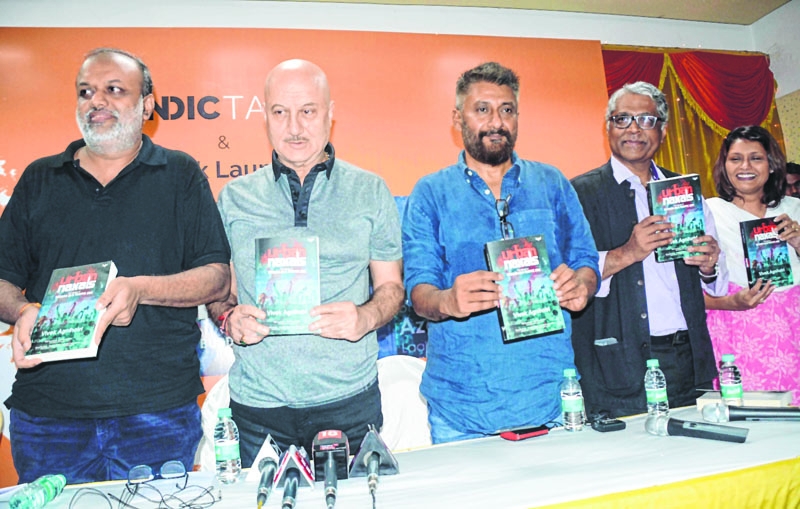 Mumbai: There are very few filmmakers who can claim to be authors, director Vivek Agnihotri has joined that privileged club with his debut book Urban Naxal: The Making of Buddha in a Traffic Jam. The launch of the book over the weekend in the city saw the presence of reputed journalist R Jagannathan and author Sandeep Singh, and actor Anupam Kher. The book is a result of his research on urban naxalism and throws light on India’s internal security threats.

The event, which was organised by the Indic Academy and their Mumbai chapter coordinator Dr. Yogini Deshpande, saw Agnihotri, the director of ‘Hate Story’, speak of his long journey — from advertising and television to Bollywood and beyond. He shared his mantra in life — “If I have a story, I’ll tell it”. He thanked Kher for supporting him through the dark times of the making and then releasing the movie “Buddha…” and credited him for giving him another motto, “Life is not about numbers; it’s about quality”.

In succinct terms, Sandeep Singh explained how “It is a war of words that we have been losing quite often.” Be it the subtle yet clear distinction between “Refugee” and “Migrant” or “Terrorist” and “Militant”, he carefully marked the differences in these terms that are interchangeably used. He also pointed out how he was associated with most of the institutes mentioned in the book and how seven of his friends figured in it too.

R. Jagannathan noted that “The terminology ‘Urban Naxals’ is a pathology.” According to him, when you internalize the self-hate of your Indic culture, due to thousands of years of colonial fare, most likely the outcome will be that you would aim to destroy what’s your own and that’s what this pathology is all about. Instead of taking this route, he wished that people helped create jobs for the downtrodden and not hurt them further.

Kher was the last speaker and enthralled the audience with his own experiences of being pushed down in life in general and in Bollywood, in particular. He always got back on his feet and wished everyone did the same.