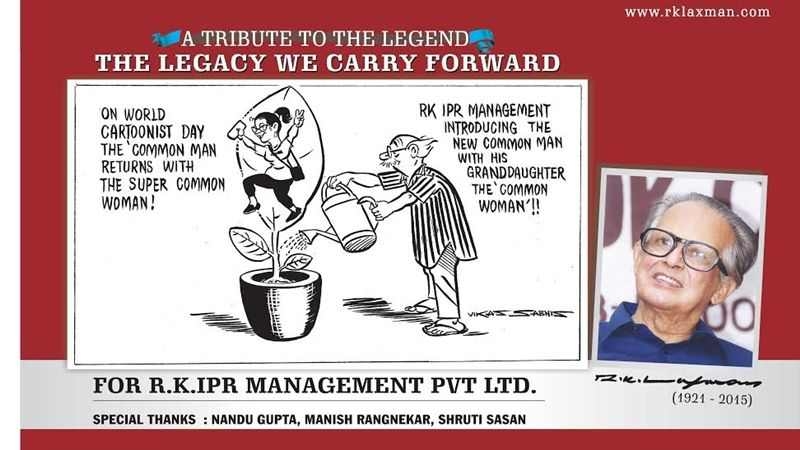 A day to honour our country’s most celebrated cartoonist R.K. Laxman, who became the voice of common man through his master strokes. He was well known as the ‘keeper of the conscience’, the creator of India’s most endearing and enduring symbol, ‘The Common Man’. Cartoonist R.K.Laxman’s company RK IPR Management is proud to celebrate ‘The World Cartoonist Day’ on May 5th , 2017 in honour of all the cartoonists and pay tribute to the Guru of Indian Cartoonist, Dr. R.K.LAXMAN, who achieved an international fame. The legacy of R.K.Laxman is carried forward with the introduction of the ‘New Common Man’ and his Grand Daughter – Rimanika Laxman, ‘The Common Woman’. RK IPR has a team of cartoonists who have been mentored by Mr. Laxman. They have the skills to contribute quality work in lines with Mr. Laxman’s concept, fine lines and humour without malice. The range of cartoons can be based on a variety of subjects which includes political, social, issues related, which can send out strong messages in a subtle manner to bring forward a thought that could inspire all generations especially the younger.

What: A hilarious comic play based on marriage life that featuring Preeta Mathur Thakur with Aman Gupta. Written & Directed by Veena Bakshi, Bas..Tum Aur Hum explores what really makes for a successful marriage. Can you term a marriage successful only because it continues to last 22 years? Shipra and Yesh seem more or less happy in this marriage – what is it that keeps them there? Two very different people with different likes & dislikes…. If marriages are made in Heaven what is it that keeps them going on Earth?

What: A sonic weave exploring poems by Kabir, Janabai and Chokhamela; an interplay of music, theatre and dance. The word Jheeni means subtle. Jheeni ventures into the empty space between words in the poems of Janabai, Chokhamela and Kabir. Their poems are worlds embedded with silences, non-verbal stories of struggle, doubt, hesitation, revelation and surrender. Navigating this uncharted terrain through a series of sonic and spatial improvisations. This musical play features Hitesh Dhutia, Sanjukta Wagh, Vinayak Netke and Shruthi Vishwanath.

What: A sweet tangy icy Gola is just what one needs to cool off this heat. Enjoy refreshing street inspired cocktail made with shaved ice and doused in the famous ‘kala khatta’ syrup with sweet and sour masalas and finally splashed with Vodka! From apple pie infused tea, to a ginger-spiked apple and pear muddle, and the revitalizing Cucumber Rosita – lemonade splashed over rosemary, cucumber, mint and lime. Even the humble Nariyal Paani is a treat.

What: Enjoy a delicious 4-course meal consisting of a wide variety of soups, veg and non-veg starters, veg and non-veg main-course, and dessert. Upon arrival you will be greeted with a refreshing welcome drink. Hand ground spices and traditional recipes spell magic on one’s palate as they blend culinary innovations with traditional methods.

What: Musical event by energetic duo of two prominent exponents of Brazilian music and jazz. Marques and Lotz takes you to a thrilling and emotional adventure in music that captivates until the last second. The 7 string guitar and the various flutes give a very broad range of timbres as well as the colourful composition of Marques rooted in folklore but heading to new horizons. Volcanic eruptions up to Rio de Janeiro city life: this duo does it all. Both also will flower up the concert with solo performances of exceptional quality.

By the Rare for the Rare

What: A musical event to create awareness about Hemophilia, a rare genetic disorder that affects one in five thousand people. The highlight of the evening will be the enthralling performances by some of the best singers of India, including Maestro Uttam Singh, the ‘Bhajan Samrat’ Anup Jalota, the most talented Rupa Chak and the upcoming singing sensation and Little Champs winner Divakar Sharma who, despite his visual impairment, has become an extremely popular singer of his age. The event will host a live orchestra performance lead by Uttam Singh and supported by his powerful team.

What: A stand-up comedy show specially lined up with female comedians all about laughter and jokes. After kitty parties and unmanned train compartments, they bring you Dame Funny, an hour of stand-up comedy completely free of testosterone…with women-who are funny-intentionally. Admittedly, they do not know many women. But they do know all the funny ones. The show is bringing them together for one PowerPuff evening at Brewbot Pub Brewery. Joining Sonali Thakker and Pavitra Shetty for the eleventh edition of Dame Funny. It also features theatre person Trupti Khamkar and IIM drifter Prashasti Singh.

What: This week witness 10 amateurs and 3 pro Stand-up Comedians take up the challenge to make you laugh with their raw unfiltered humour. Come witness the birth of a great joke or the birth of a disastrous one! All in all, it shall be a night to remember! It’s always great to laugh at others expense. Hosted by Ashish Dash, also featuring Angad Singh Ranyal, Vikram Poddar and expect a few surprise acts.