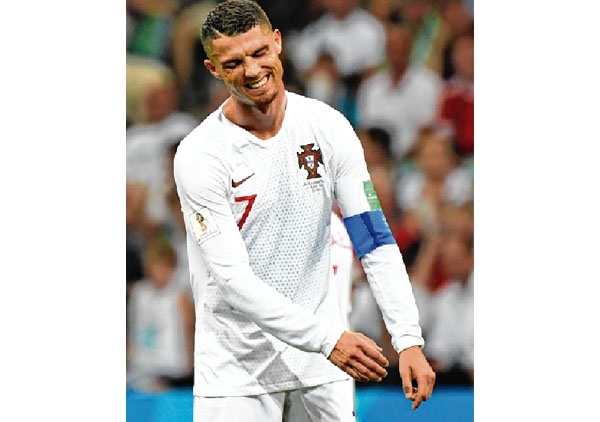 Sochi [Russia] : Portugal captain and star striker Cristiano Ronaldo has said that his team played well in the FIFA World Cup and deserved something more out of the tournament.

The comment came after Portuguese were knocked out of the World Cup by Uruguay in the eliminating round.

“We must congratulate Uruguay because they are the national team that are in the quarter-final. I think we played a good game and maybe we deserved more, but in football, the ones that score the most goals win and they scored two, so congratulations,” Marca.com quoted Ronaldo, as saying.

“We leave with our heads held high. As the captain of Portugal, I know how hard we have worked and we must be proud of the team,” he added.

“This team will continue to be one of the best in the world, with quality players, a young group, united. I am confident and happy because this team will always fight with all their strength,” he added.

Uruguay brushed aside Cristiano Ronaldo’s Portugal 2-1 in their round of 16 encounter at the ongoing 21st edition of the FIFA World Cup on Saturday.

Meanwhile, Portugal coach Fernando Santos has lamented the elimination of his team in the second round of the 2018 FIFA World Cup, while expressing his wish that the reigning European champions continue to be led by Cristiano Ronaldo, “who still has a lot to give to football”.

“I am convinced that he has a lot to give to football, there is a tournament in September, the league of UEFA nations and we hope he is with us to help the young people, who need the example of the captain,” he said of the 31-year-old superstar after Portugal’s loss on Saturday, reports Efe.

Edinson Cavani scored in the seventh and 62nd minutes while Portugal got their goal from Pepe in the 55th minute at the Fisht Stadium as Uruguay entered the last eight stage of the World Cup only for the second time in 48 years.

The coach said Ronaldo knows how to play as a team and that no player can win a single game.

“I want to thank the players for their delivery, we did our best, but there is no moral victory, only the points victory and I have to congratulate Uruguay,” he said.

“Uruguay scored two goals and we only scored one. We can not say that we made mistakes. we knew they were good in midfield, we tried to beat them back in the first half, we did it well.

“In the second we had more success, we had two very good chances but we did not achieve it,” he said.

Ron’s girlfriend gets bullied by trolls

Moscow : Portuguese star Cristiano Ronaldo’s partner Georgina Rodriguez has been targeted by trolls after Portugal was ousted from the FIFA World Cup.

Georgina, 24, has been harassed on her Instagram account since the incumbent European champions bowed out. One of her recent posts, in which she wished good luck to Ronaldo and Portugal’s team, has been swarmed with angry and malicious comments like “Uruguay, jeje,” “Good bay Portugal” and “You must say now Cristiano go to house.”

Iranian fans used it to take revenge for their national team’s defeat to Portugal in the group stage, posting Iranian flags. Some posted messages like “Yep, your boyfriend is going home now,” “Bye bye Portugal”.