‘We have nothing to prove to anyone’ 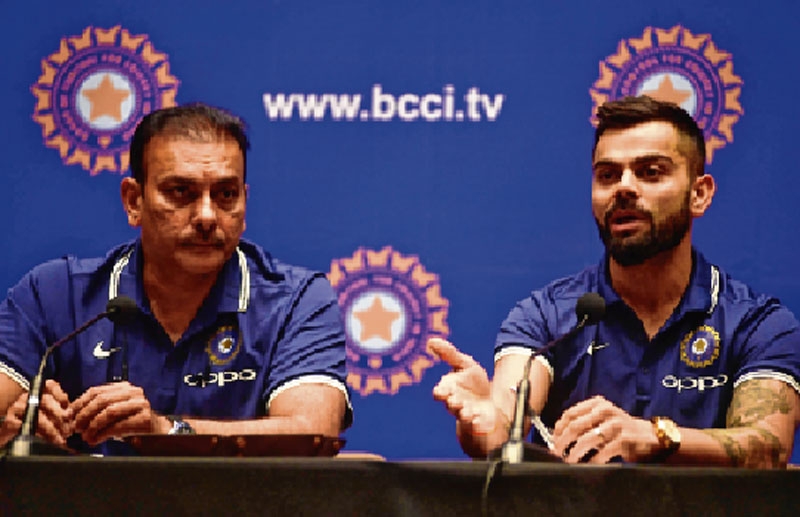 “You need to play really good cricket for a very long period of time to win series and that is something that we are pretty excited about and we want to go out there and express ourselves. The most important thing is that we are enjoying each other’s company and that’s exactly what we are looking to do,” says Kohli

Mumbai : Winning Test matches outside the sub-continent has been an ‘Achilles Heel’ for the Indian teams over the years but skipper Virat Kohli made it clear that they have “nothing to prove to anyone” during the upcoming South Africa series, starting January 5.

India have not won a single Test series in the ‘Rainbow Nation’ for the past 25 years, starting back from the inaugural one in 1992. “We have got rid of all the mental pressures of touring abroad and wanting to prove to people. We are not wanting to prove anything to anyone and our duty is to go out there, give our 100 per cent effort for the country and get the result that we want to,” Kohli said at the pre-departure press conference of the Indian team.

The skipper said that one needs to be realistic that “sometimes the team will get results and sometimes it won’t”. “We need to be realistic with what we are doing and that the only way we will be staying in the present and execute the things we want to. We are going there to just play cricket and it does not matter whether we are in South Africa, Australia, England or India,” straight-talking India captain said. “When you do things in conditions that are more challenging, that gives you more job satisfaction, that is for sure,” the skipper spoke about the biggest incentive.

Indian teams over the years have struggled with the bounce that South African pitches offer, having won only two Test matches over the years. The best result came during the 2010-11 series, which India drew 1-1.

“It all depends on the kind of mindset you get into as batsman. Any place, even Indian conditions can be very difficult if you are not in a good frame of mind, so cricket is played with ball and bat and if you are not there mentally, it does not matter the conditions you are playing in. “You need to take up challenges mentally and then every conditions seem like home conditions. If you get accustomed to where you are going and you start feeling comfortable embracing the culture, people, it becomes easier,” he explained.

He had scored a century in Johannesburg during the 2013- 14 tour and he attributed it to his urge for embracing the a challenge. “I only played Test cricket once in South Africa but I was looking forward to it. (Cheteshwar) Pujara was as well, so was Jinks (Ajinkya Rahane). So we ended up doing well because we were excited about what we were going to do and that excitement is very important to maintain.”

Kohli agreed that they haven’t played a lot outside sub- continent of late but the current crop is confident of a good show. “We are talking about a wholely different prospect over here, which we understand as a team and we are looking forward to it. Every tour is a chance, if you look at the teams which have gone to South Africa in the past, I mean you are talking about some of the biggest names in Indian cricket, it’s not like that was not like a chance,” Kohli sounded cautiously optimistic.

The skipper did admit that the bowling attack of South Africa in 2013-14 with a much younger Dale Steyn and Morne Morkel was more experienced. The current leader of the pace attack is young Kagiso Rabada with both Steyn and Morkel making international comebacks after lay-offs due to injuries. “The bowling attack back then compared to now what South Africa has was more experienced and we did really well against them.

We almost won the Test in Jo’burg (Johannesburg), it was a close game, we lost in Durban, but we played some really good Test cricket. “The bowling and the batting has come a long way, all the guys are much more experienced now, but the hunger remains the same, we still want to go back and try to do what we couldn’t do last time around,” he concluded.

‘Getting married was much more important’

Getting married was “something much more important” than a cricket series for Virat Kohli as he asserted that the three-week break won’t affect his preparations for the upcoming South Africa tour.

The India captain opted out of the limited-overs series against Sri Lanka to get married to Bollywood actress Anushka Sharma in a private ceremony in Tuscan, Italy.

Following their wedding in Italy on December 11, Kohli and Anuskha had hosted grand receptions in New Delhi and Mumbai, where several Bollywood and sporting celebrities were spotted. Just prior to the break, Kohli was in red-hot form smashing 610 runs in the three-Test series against Sri Lanka.

Even though he was busy with his wedding celebrations, Kohli said he continued to prepare for the gruelling South Africa tour side-by-side during the break. “I haven’t done anything in the past three weeks. I have been training to get back to play in South Africa. Somewhere in your head you are always thinking about you have something important coming up, so subconsciously you are looking forward to it (South Africa tour). So, mentally I am very well prepared.”