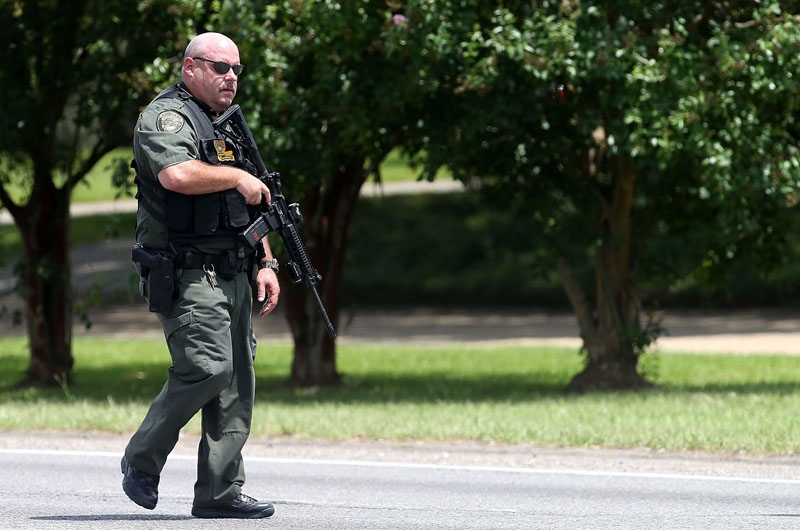 BATON ROUGE, LA - JULY 17: Baton Rouge Police officers patrol Airline Hwy after 3 police officers were killed early this morning on July 17, 2016 in Baton Rouge, Louisiana. According to reports, one suspect has been killed while others are still being sought by police. Sean Gardner/Getty Images/AFP == FOR NEWSPAPERS, INTERNET, TELCOS & TELEVISION USE ONLY == |

Washington: A masked gunman killed at least three police officers and injured at least five more in Baton Rouge, Louisiana, on Friday. Several of those injured were reported to be in critical condition.

The shooting in Baton Rouge has come less than two weeks after the killing of 37-year-old Alton Sterling, a black man killed by white police officers earlier this month after a scuffle at a convenience store. This was followed a day later by the fatal shooting of another black man in Minnesota. Then on Thursday, a black gunman in Dallas opened fire on the police, killing five officers and heightening tensions even further.

The masked gunman, who was wearing black, was seen firing indiscriminately as he walked between a shop and a car wash, a witness said. The police received a 911 call reporting a ‘suspicious person walking down Airline Highway with an assault rifle’, the source said. The gunman is said to have opened fire when the cops arrived.

Three officers have been confirmed dead. A source told CNN that four officers are in a critical condition in hospital.

A video taken by a bystander at the scene captured the panic as gunshots ring out. Another showed police officers brandishing rifles as they ran towards the scene.

Also Read 4 months on, no FIR against officials of Dongri observation home

The attack appeared to have been carried out by a lone gunman, US media reports said. While the scene of the shooting was contained, the police have still not taken the shooter into custody and warned local residents to stay away from the scene, near Airline Highway.