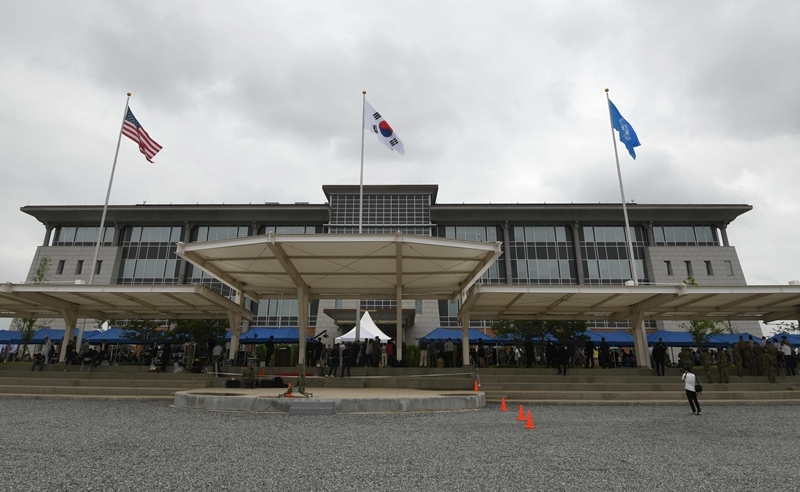 Pyeongtaek (South Korea): US forces in South Korea opened their new headquarters today, on what they called Washington’s biggest overseas base, just weeks after President Donald Trump said he wanted to bring the troops home. The US and South Korea are treaty allies and for decades US Forces Korea (USFK) have been headquartered in Yongsan, in the centre of Seoul and prime real estate.

The two allies agreed as long ago as 1990 to relocate the headquarters to Camp Humphreys, an existing base in Pyeongtaek, around 60 kilometres (38 miles) south of the capital. But the project was delayed for years by resident protests, financial issues and extensive construction work.

It was not until 2013 that the first unit transferred across to Camp Humphreys, named after a pilot who died in a helicopter accident. The USFK headquarters moved today, as did the US-led United Nations Command, under whose flag the allies fought in the Korean War, with more units to follow suit later.

The US has 28,500 troops stationed in the South to defend it from the nuclear-armed North, and the move comes only weeks after Trump and Pyongyang’s leader Kim Jong Un had an unprecedented summit in Singapore. At a press conference afterwards Trump announced he would suspend joint military exercises with the South — Seoul indicated that it was not informed beforehand — adding that at some point, “I want to bring our soldiers back home.”

Trump has demanded the South pay more towards the US military presence in the country, and negotiations on the issue are continuing. But USFK commander Vincent Brooks told Friday’s opening ceremony that Seoul had contributed more than 90 per cent of the $10.8 billion cost of Camp Humphreys, “which we believe to be the largest overseas US base in the world”.

Camp Humphreys incorporates a total of 513 buildings including schools, shops and banks spread over 14.7 million square metres, and will accommodate 43,000 people including soldiers and their family members by the end of 2022.

The headquarters building represented “a significant investment in the long-term presence of the US forces in Korea”, Brooks said, adding “USFK will remain the living proof of the American commitment to the alliance”.

The North, which invaded its neighbour in 1950, has yet to make any public pledge to give up its weapons, despite a rapid thaw in relations on and around the peninsula brokered by the South’s President Moon Jae-in. But South Korea’s defence minister Song Young-moo said the USFK would embrace a new role as circumstances shifted “from Cold War confrontation to peaceful co-existence”.

It would “contribute not only to peace on the peninsula but also to world peace as a stabiliser in Northeast Asia”, he said.