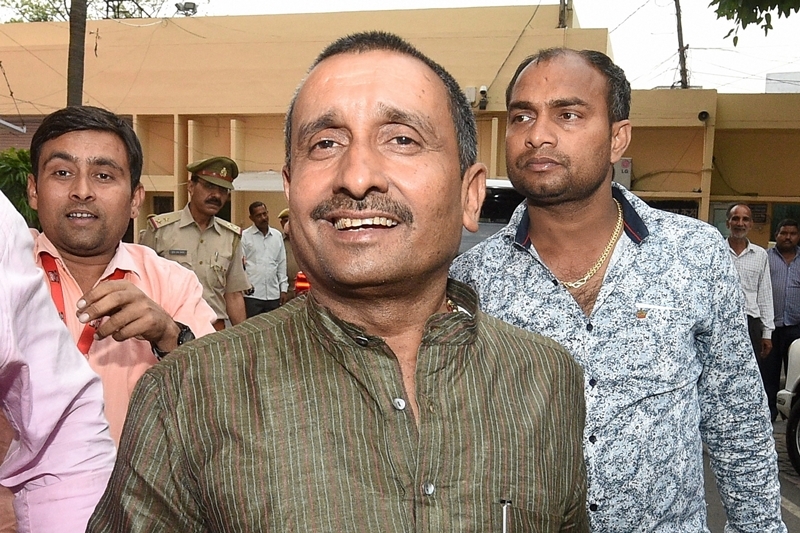 Lucknow: After day-long interrogation over the allegations of raping a 17-year-old and conspiring to kill her father later, the CBI late on Friday arrested the Bangarmau legislator Kuldeep Singh Sengar, officials said.

The BJP lawmaker, informed sources said, got irritated on more than one occasion and then broke down during his grilling by CBI sleuths. He pleaded not guilty and alleged that he was being framed under a political conspiracy, an official said.   The Central Bureau of Investigation (CBI) teams, which were handed over the probe on Thursday sought the mobile phone records of Sengar and his brother Atul Singh, who is also under arrest for beating up the father of the victim, who later died in police custody.

The CBI is learnt to have also sought to know, in detail, from the legislator on where he was when the father of the victim was being thrashed at the Makhi police station and what all he tried thereafter to save his brother and four other aides. Meanwhile, the uncle of the victim, soon after the arrest of the accused legislator aired satisfaction over the development and added that they were now “hopeful that justice would be done”.

He however rued the fact that his initial demand for a CBI probe was stonewalled by the state and regretted that had this probe been ordered earlier, his brother would have been alive. He also said that the family still fears for their life but were hopeful that no harm would come to them as the premier investigative agency had now taken up the case.  Earlier in the day, Sengar was picked up by a team of the CBI, lead by Superintendent of Police Raghavendra Vats, from his residence in Indiranagar from where he was driven to the zonal office of the CBI and interrogated for several hours.   During this period, the CBI also collected various evidence with regards to the two cases for which it has filed three FIRs.

The CBI team also met the victim at a hotel in Unnao where she is put up under police protection. The agency recorded statements of her and the family for more than three hours.   A four-member team of the CBI went to the Makhi police station where they took over many police records and documents.  The team, later in the day met the Unnao Superintendent of Police Pushpanjali and took briefing on the entire matter with specific timelines. The CBI also spoke to senior doctors at the district hospital and were closeted with pharmacist NK Singh and chief medical superintendent DK Dwivedi for more than hour.

During the meeting, they took details of the “line of treatment” given to victims father when he was rushed to the hospital buy the police with 18 wounds and a ruptured intestine, due to beating by the lawmaker’s brother and their close aides along with the police.   CBI officials also took over records such as treatment prescription, ultrasound reports and details of the post-mortem which was conducted by a panel of doctors. The rang rape of the girl after which her father ran from pillar to post to nail the ruling party legislator, only to end up battered and bruised and dead in police custody, has triggered a political storm and public outrage.

After initially dragging its feet in taking action against the legislator, Chief Minister Aditynath ordered a probe by ADG (Lucknow), a special investigation team was onstituted along with a judicial probe ordered by the Unnao district administration. Adityanath has vowed that no one guilty, however high and mighty he might be, will not be spared.