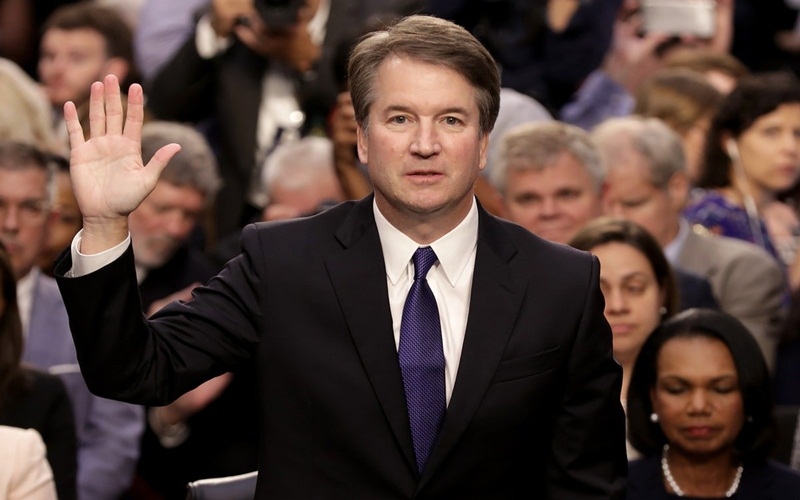 Washington: Brett Kavanaugh’s confirmation to the US Supreme Court appeared all but assured after two key lawmakers who had wavered on his controversial nomination signaled their support. Senate Republican Susan Collins Friday affirmed in a closely-watched floor speech that she will vote for the conservative jurist nominated by President Donald Trump, and moments later Democrat Joe Manchin broke ranks to announce his own backing.

Their declarations of brought the number of senators publicly supporting the 53-year-old judge — who has faced accusations of sexual assault — to 51 in the 100-member chamber. A final confirmation vote is expected Saturday afternoon.

Kavanaugh’s nomination was left teetering on the edge after university psychology professor Christine Blasey Ford claimed in harrowing testimony last week that he tried to rape her when they were high school students. But Collins, a moderate, pro-choice lawmaker from Maine, said Kavanaugh was entitled to the “presumption of innocence” as the allegations against him lacked corroborating evidence.

While Collins acknowledged that Blasey Ford’s testimony was sincere, painful and compelling, and that the accuser is a sexual assault survivor, she added that “I do not believe that these charges can fairly prevent Judge Kavanaugh from serving on the court.”

Immediately after the Collins speech Manchin announced his support, calling Kavanaugh a “qualified jurist” who “will not allow the partisan nature this process took to follow him onto the court.”  Manchin faces extraordinary political pressure. He is up for re-election in West Virginia, a state Trump won overwhelmingly in 2016.

Earlier on Friday the Senate voted 51-49 to end debate on Kavanaugh’s nomination, setting up a final showdown on Saturday. The outcome had remained in doubt, however, after one Republican, Lisa Murkowski, defied her party and voted against moving ahead.

Trump nevertheless cheered the result of the cloture vote. “Very proud of the US Senate for voting ‘YES’ to advance the nomination of Judge Brett Kavanaugh!” the president said on Twitter. After Collins’s speech, White House press secretary Sarah Sanders took to Twitter to thank her “for standing by your convictions and doing the right thing.”

If he wins confirmation, Kavanaugh — who has faced a bruising process that raised questions over his candor and partisan rhetoric, and his lifestyle as a young man — will seal a conservative majority on the nine-seat high court for years to come. Trump took the brutal battle to a new stage earlier Friday when he dismissed female anti-Kavanaugh protesters who have cited their own experiences of sexual assault as “elevator screamers.”

The president claimed billionaire financier George Soros, a frequent target of conservatives, was behind their demonstrations. “The very rude elevator screamers are paid professionals only looking to make Senators look bad. Don’t fall for it!” he tweeted. Collins appeared to fall in line with Trump’s accusation that outside funding was being pumped into the process, as she slammed the “unprecedented amount of dark money opposing this nomination.”

The confirmation process has gripped Washington and the nation, aggravating already deep political divisions with just weeks to go before mid-term congressional elections. Among those closely watched is Republican Senator Jeff Flake of Arizona, a frequent Trump critic who is not running for re-election and has expressed concern about Kavanaugh.

On Friday he voted to advance the nominee, then told reporters that barring any dramatic changes, he will vote yes on Kavanaugh’s confirmation. Another wrinkle for Saturday’s vote: Republican Senator Steve Daines was to fly home Friday to Montana for his daughter’s wedding, raising the prospect of Republicans losing a potentially vital yes vote.

But Daines tweeted that he spoke with Kavanaugh and assured him: “I will be back to vote yes this weekend if needed.” Protesters have spent days in Washington urging swing senators like Collins and Murkowski to vote no. On Thursday 302 people were arrested and charged with unlawfully demonstrating inside the Senate complex.

Friday saw dozens of people crowd into Collins’s office pleading with her staff to tell the senator to oppose Kavanaugh, to no avail. Trump’s reference to Soros, who has supported pro-democracy movements around the world and the US Democratic Party for years, appeared to aim at inciting more support and anger from the president’s conservative Christian base.

The Jewish billionaire is frequently described by arch-conservatives as a behind-the-scenes operator driving liberal and progressive movements — criticisms that have prompted counter-accusations of anti-Semitism. But Democrats continued Friday to argue that there had been too little effort made to investigate the allegations against Kavanaugh.