Ujjain: Why is state nearly bankrupt after 15 years of BJP rule 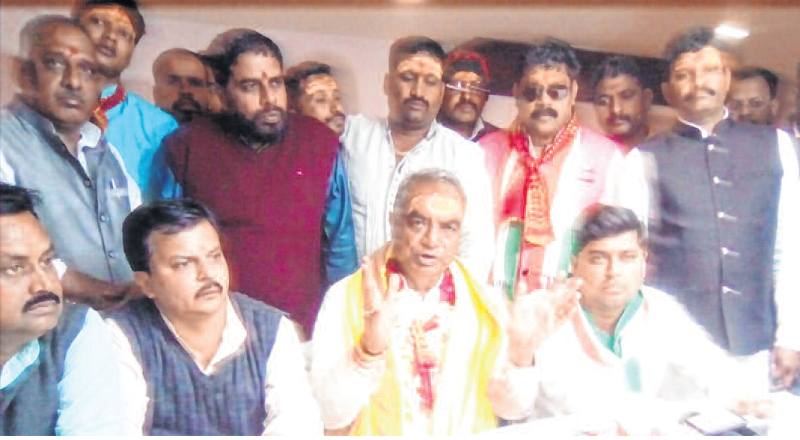 Ujjain: The UPA government had given grants to all state governments without discrimination, but since the government of NDA has come, nobody knows that how many grants have been received by the Madhya Pradesh government. When BJP came to power in the state the outgoing Congress government left loan of Rs 20,000 to 22,000 crore for the new government. However, this has increased by a whopping Rs 1.99 lakh crore. In such adverse situations, we have taken the reins of government. On the contrary the then finance minister Jayant Malaiya has the heart to joke on this fiscal mess of the state and say that BJP is returning what it received.

But the question to be asked is this- What you did in 15 years so as to bring the fiscal condition of the state to near bankruptcy? Pradesh Congress Committee (PCC) treasurer Govind Goyal while addressing a press conference here on Wednesday made the above remarks. He said Kamal Nath is a visionary leader and soon you will get to witness his vision as the industries, trade and commerce develop in the state and employment is generated. He has announced the establishment of five garment parks.

Until the industry is developed, the revenue of government will not be generated. Speaking is different and vision is a different matter. The better qualified a person the better will be his quantum of deliverance. Under his leadership Chhindwara has seen tremendous development even after the world-wide economic slowdown. Goyal claimed BJP ran government for 15 years, but without vision. We will run the government with vision, effort, and transparency and without corruption.

We will prevent unnecessary expenditures, will stop corruption and will ensure new development. On the very first day in government, raids were carried out on gambling dens in Narera area of Bhopal and all of them were locked. Corruption will be stopped by such ways as even the dishonest is also a form of corruption. The government will be run from the rule of law and there will be no political interference.

The PCC treasurer said, we will take the state on the path of development by making systematic plans. It will take time to study the financial situation and make plans. It will be hasty to talk about bringing white paper on fiscal state of Madhya Pradesh at this juncture. The works which the BJP could not do in 15 years, do not expect us to do so much in a day, though it will be all right, after some time.

He said those who did corruption in Simhastha Fair- 2016 will not be spared, but before doing anything related files will be collected and examined thoroughly. Our government has been formed by the grace of almighty. If the situation was like 112-112 seats won by both parties, then BJP would have dealt with us differently because Amit Shah’s bag is very big and heavy. Now these bags will be used for the Union government as there will be no meaning of them in Madhya Pradesh, Chhattisgarh and Rajasthan, Goyal added.