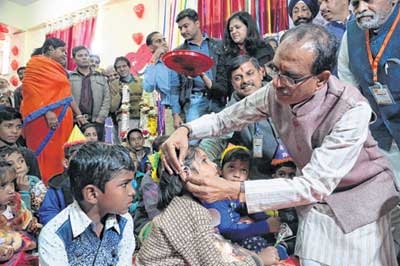 Ujjain: Chief minister Shivraj Singh Chauhan paid a short, but significant, visit to the city on Wednesday. He spared about three hours to take part in two programmes, besides meeting peoples representatives and media persons. Since he got late to arrive at Datana airstrip from Bhopal, which also delayed his departure, the CM cancelled his visit to Seoni.

Shivraj cut a big cake, sang a song ‘happy birthday to you’, hugged children and also gave them blessings, besides distributing hearing devices to them. It was an assembly of those 51 kids at the Police Community Hall, who were benefited with the ‘CM Child Heart Treatment Scheme’ and ‘Cochlear Implant Scheme’. About Rs 1.07 crore were spent on this noble cause and beneficiaries along with their parents appeared quite jubilant. Shivraj applied vermilion on the foreheads of the kids and also touched the feet of girls to take blessings from them. Also, he released a small book, ‘Safalta Ki Kahaniynan’, based on the sorry tales of such kids. In his brief speech, the CM made a firm announcement, “None of the poor in Madhya Pradesh would see deficiency in treatment…special medical camps are being organised across the state…all those suffering from heart, hearing, cancer and kidney problems will be identified soon and provided free of cost treatment,” he said.

About half a dozen security persons accompanied the CM on his arrival by air from Bhopal and departure from here. After a long time, none of his secretaries or deputy-secretaries or family members was seen accompanying him to the Mahakal city. This time, police administration avoided to indulge in any sort of confrontation with the peoples’ representatives or the BJP leaders. On the contrary, they allowed hundreds of people to enter the airstrip, but dissatisfaction was seen in the media persons when ASP Amrendra Singh barred them from entering the air strip in the name of security arrangements. Notwithstanding, all went quite and calm, but a controversy emerged in the evening when a video depicting a security person from Bhopal carrying the CM’s shoes went viral. This incident was shot when the CM was approaching the venue of study session of the BJP workers after meeting Jain seer Pragya Sagar.

Fair indications that BJP will win

Media persons tried to chase and approach CM Chauhan, during his visit on Wednesday, at all those places where he reached. However, Shivraj gave replies to only those questions, which he was keen to respond to. He said preliminary indications clearly suggested that the BJP would win Uttar Pradesh Assembly elections besides other states. He said a plan would soon be prepared for carrying out massive beautification work outside the Mahakaleshwar Temple. On the behest of MP Chintamani Malviya, he talked to rail minister Suresh Prabhu on phone and requested to give a date soon for the inauguration of the much-awaited work of conversion of Ujjain-Fatehabad narrow gauge track into broad gauge. Prabhu advised the CM to choose a date himself, on which Malviya said February would be suitable. On the occasion, Shivraj also remembered the social services rendered by 10th religious head of Sikh community, Govind Singh and said local holiday had been declared on January 5. Prominent among those present during the CM’s visit included energy minister Paras Jain, MLAs Mohan Yadav, Bahadur Singh Chauhan, Anil Firojiya, mayor Meena Jonwal, BJP presidents Iqbal Singh Gandhi (urban) and Shyam Bansal (rural), Ujjain Development Authority chairman Jagdish Agrawal and BJYM president Vishal Rajoriya.

‘People take me lightly due to my physique’

At Mahaveer Tapobhumi, where a three-day state-level training camp of about 150 full-time (male) BJP workers was organised ahead of ‘Mission-2018’, Shivraj looked like a teacher narrating achievements of his government during a 50-minute oration. BJP national vice-president and state in-charge Vinay Sahastrabuddhe, state general secretaries Suhas Bhagat and Vishnudutt Sharma, besides Jain Muni Pragya Sagar were present. In a jocular vein he said at the camp that party workers used to take him lightly because of his single-bone structure. On the other hand, he explained at length about the reasons why he initiated various welfare schemes to provide social justice to the poor, down-trodden and needy people despite wide range of criticisms. The CM also indicated that farmers, women and houseless people would be on the top of his agenda and many schemes had been charted out therein for their uplift. The Jain seer said keeping faith in the leadership avoided disintegration and those active in politics should rely on their leaders, besides honouring the programmes and policies of their organisation.