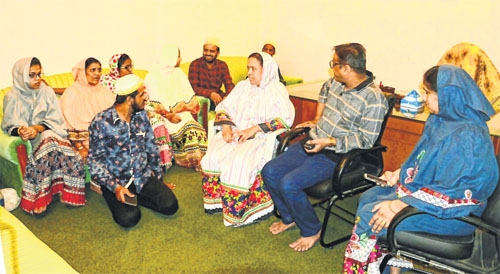 Ujjain: A group of Haj pilgrims have started a dharna against an apparently unjustified omission of their names from the list of visitors to Mecca.

Shabbir Hussain, his wife and mother were struck off from the list just a day before they were to undertake the journey, without being given any reason. Baffled over the unjust decision, he along with his family sat in a dharna on Monday morning at the office of Aamil Sahab and said would continue the dharna until any responsible person gave him an appropriate reason for cancellation of permission of his pilgrimage.

Shabbir, his wife Rashida and mother Jaheda had applied for Hajj in the local office. Following the completion of procedures, their names were confirmed by a Mumbai based travel agency ‘Faiz Hussaini’ and were asked to deposit the money. He, in installments, deposited a sum of Rs 6 lakh to the agency. But a few days later, a message was received by Shabbir about cancellation of their journey without any reason.

He then went to the office of Aamil Sahab at Burhani Hall, Gaunsa Darwaza in vain. Adamant to know the reason, he sat in a dharna in the office and refused to budge until the reason was known.