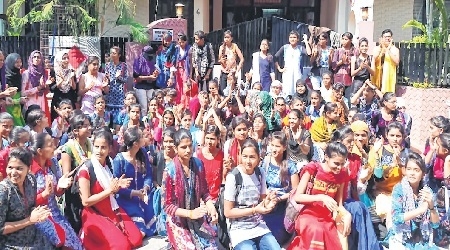 Students of Government Girls’ Kalidas College staged protest on Friday in front of energy minister Paras Jain’s residence located in Uttam Nagar and demanded shifting of college to its new building as the existing college building is shaky and dilapidated. The girls reached the collage on Friday morning, gathered and locked the main gate of the college. They were demanding early shifting of college to its new building.

Student union president Diksha Sharma took a pot shot at the administration for delaying in shifting the college to its new building, in her address she told that condition of crumbling ceiling of the college is deteriorating and cement plaster of wall and ceiling is continue to fall down and many time caused injury to students by now.

According to Diksha Sharma, there are 1600 students in the college and after earlier agitation the administration assured them to shift the college as early as possible but after passing off several months the college was not shifted to its new building while the construction work of the new building is going to be completed.Heavy police force including women was deployed in Uttam Nagar. A lady executive magistrate also reached there to receive a memorandum from the agitating girl students.