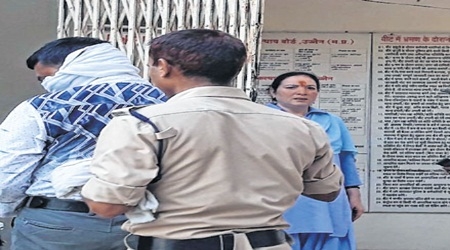 Ujjain: A local court sent Jagdish Parmar, who claimed to be a journalist, to one-day police remand in connection with rape and extortion of money. He was handed over to the Mahila Thana police. TI Rekha Verma informed that the accused was arrested on Monday afternoon, and produced before a JMFC court, which handed him over to the police station on a day’s remand.

She informed that though the mobile set utilised in the crime was recovered from the accused, materials like jewelry, money etc which he extorted from the victim, were yet to be recovered. She said an intensive interrogation was being carried out.

A 30 year old woman resident of Teliwada, had complained that Jagdish Parmar had raped her for more than 18 months and also secretly made a sex video film. According to the victim, she used to visit the Mahakaleshwar Temple, as her husband was a drug addict and alcoholic, when the accused came in contact with her.

The victim said the accused visited her house and after seeing her poor economic status and the condition of her husband, assured to help them. He then took them to Nagjhiri Nasha Mukti Kendra to cure her husband’s addiction. On July 2, 2016, Parmar summoned her to his residence in Sethi Nagar under the pretext of providing medicines for her husband and forcefully raped her.

He also recorded the lewd act on video. The victim said Parmar exploited her sexually after blackmailing her about the video and photographs. When she asked him to delete the video and photos, Parmar demanded Rs 10 lakhs from her and threatened to make it viral.

Parmar was booked late on Sunday, under Section 376(2) (n), 384 and 506. Reports also suggest that at least three or four complaints of a serious nature have made against Parmar in different police stations earlier too, but no action was taken, as he reportedly enjoys patronage of some influential persons. On being asked, the Mahila Thana TI said they received no such complaint as yet.