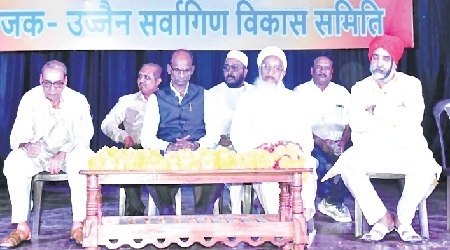 As Trivedi couple is a known supporter of Kamal Nath, they had planned to highlight his achievements being Chhindwara MP and his efforts to provide ample of funds for Ujjain’s development in the capacity of Union minister. Bhopal-based writer Bhaskar Rao Rokde, who has recently authored a book on Panoptic Vision of Chhindwara Model, was the key speaker.

He started his oration by saying he has arrived in the city to awaken the voters and to caution the leaders. Referring to Simhastha Fair-2016, he asked why the infrastructural workers were launched only one year prior to the mega international event. He said, people still groping in dark whether such works were carried out under a concept of development or it was sheer wastage of public money.

The said representatives who shared the dais as special invitees viewed that action plan can be prepared only if there is a straight line of development. They said that ancient culture and heritage values of the city cannot be disturbed in the name of implementing a development model of one party or the other. Counting Nath’s contribution, Rokde said that the former included Ujjain in DMIC (Delhi-Mumbai Industrial Corridor) project by elevating the proposed route and also made a provision to establish four ports on it.

According to him, execution of Knowledge City component was a dream aim for Ujjain and it could resurrect the ancient identify of the city of being ‘Kshikshadhani’ (capital of education). “It was not an ordinary knowledge city and could be a world-wide project of in-campus and out-campus training and placement for innumerable unemployed youths, but the State government and BJP leaders deleted the project from DMIC and renamed it as Vikram Udyogpuri,” he commented. Amit Sharma conducted the proceedings and Girish Pathak proposed a vote of thanks.