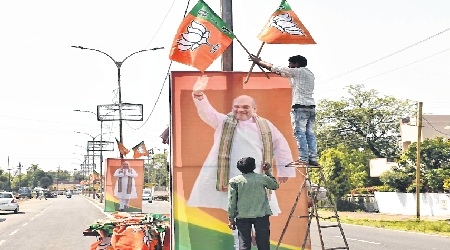 District unit of BJP are all set to welcome its national chief Amit Shah during his visit ahead of assembly poll. According to media in-charge Sachin Saxena, state vice-president Vijesh Lunavat came to the city and took the stock of preparations. He visited the programme venue Shehnai Garden and attended the preparatory meeting which held there under the chairmanship of district BJP (urban) head Vivek Joshi.

BJP’s workers placed the posters and hoarding of Shah across the city amid the civic body’s campaign against placements of hoarding, banners and flexes on government private property. Addressing the meeting the programme in-charge Anil Jain Kaluheda said Shah will attend party workers’ convention on 6pm on Saturday and will boost them during his address. He will also pay his obeisance to lord Mahakal before leaving the city.

Saxena informed that before reaching the city Shah will address kisan sammelan to be held in Jaora on the same day. Addressing the meeting energy minister and in-charge of the convention Paras Jain and Bansilal Gurjar stated that CM Shivrajsingh, state BJP head Rakesh Singh, state in-charge Vinay Sahastra Buddhe and other senior BJP leaders will also accompany the BJP chief.