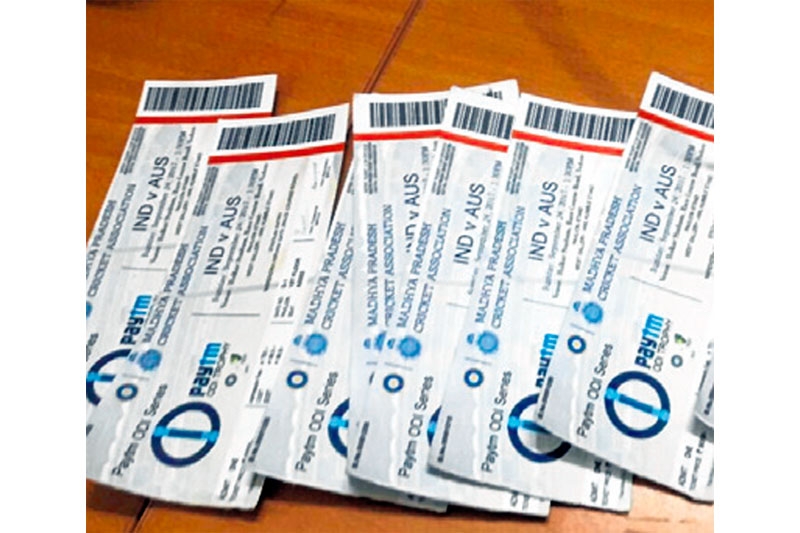 Indore : City crime branch on Saturday arrested two persons for allegedly printing fake tickets of India-Australia cricket match to be held on Sunday and selling them in the market. The accused had sold 31 such tickets in the market and were trying to sell other tickets but they were arrested. The accused are being questioned to know that where they have sold the tickets and persons involved in the act.

According to ASP (crime) Amarendra Singh, DIG Harinarayanachari Mishra had instructed crime branch to trace persons who are involved in selling match ticket in black in the city. The team was working on it and arrested two persons following a tip-off. Accused were identified as Ravindra Mimrot of Pancham Ki Phel and Dheeraj Sarwan of New Palasia area of the city.

Accused told that they had bought a ticket from the counter and later they prepared a plan to print fake tickets to sell it in the market in black. Later, Ravindra had scanned original ticket with the help of scanner machine and later he printed 40 fake tickets. He had given the fake tickets to Dheeraj to sell them in the market. Accused confessed to sell 31 tickets in the market and they had earned Rs 41,000 by selling fake tickets so far. They were trying to sell remaining 9 tickets but before that they were caught by the police. Nine tickets have been recovered from their possession and police are trying to recover money from the accused. Investigation into the case is in progress, police said.