Trump was a ‘change candidate’, don’t underestimate him: Obama 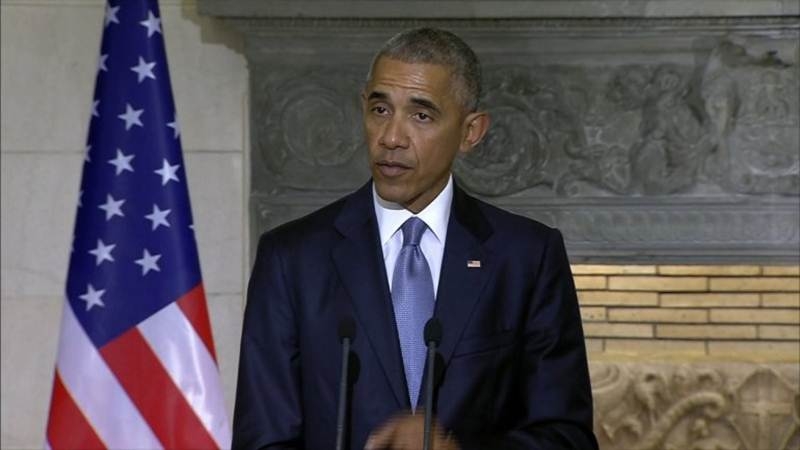 Washington: US President Barack Obama has said Donald Trump was a “change candidate” and cautioned people against underestimating the President-elect, even as he acknowledged that it has been an “unusual” transition.

“But I think that it is not going to change, because somebody from high directs that change. Members of Congress on both sides of the aisle, are motivated by all kinds of issues,” the 55-year-old outgoing President said.

“They’re sincerely interested in the economy, in terrorism, in social issues. But the one overriding thing they’re interested in is getting re-elected. And if they think that it’s harder for them to get re-elected by cooperating with each other, then they won’t cooperate,” Obama said.

Reflecting on the election campaign, the US President said Trump was clearly able to tap into a lot of grievances. “And he has a talent for making a connection with his supporters that overrode some of the traditional benchmarks of how you’d run a campaign or conduct yourself as a presidential candidate,” Obama said of the billionaire-turned-politician, who will be sworn-in on January 20.

“What will be interesting to see is how that plays out during the course of his presidency. We are moving into an era where a lot of people get their information through tweets and sound bites and some headline that comes over their phone,” he said, in an apparent reference to the series of tweets that Trump writes everyday, which very often are the main source of news.

“And I think that there’s a power in that. There’s also a danger, what generates a headline or stirs up a controversy and gets attention isn’t the same as the process required to actually solve the problem,” Obama noted. Obama also cautioned political pundits and others who are critical of Trump that they should not underestimate him.

“First of all, I think everybody has to acknowledge don’t underestimate the guy, because he’s going to be 45th president of the United States,” he said.

“The one thing I’ve said to him directly, and I would advise my Republican friends in Congress and supporters around the country, is just make sure that, as we go forward certain norms, certain institutional traditions don’t get eroded, because there’s a reason they’re in place,” he said. Responding to a question, Obama acknowledged that this is an “unusual” transition.

Describing Trump as an unconventional candidate, Obama said he does not think there is anybody who has run a campaign like this successfully in modern history. “Not that I can think of. And, as a consequence because he didn’t have the support of many of the establishment in his own party, because he ran sort of an improvisational campaign –,” he said. However, Obama said he does not think that Trump can run an improvisational presidency.

“I don’t think so. And so now he’s (Trump) in the process of building up an organisation. And well, we’ll have to see how that works. And it’ll be a test, I think, for him and the people that he’s designated to be able to execute on his vision,” Obama said.

He said over the course of first two years of his administration, he was so busy and so focused on getting a bunch of stuff done that they stopped paying attention to the fact that, leadership is not just legislation, that it is a matter of persuading people and giving them confidence, and bringing them together and setting a tone.

“For the next six years, there would be legislative gridlock, and by 2016, the people who had looked to Obama for change were looking somewhere else,” Obama said.

“In the first two years, when I had a strong majority in the House and the Senate, we were as productive as any administration has been since the ’60s. I mean, we got a lot done. And so you can get a lot of stuff done through this system. But to sustain a governing majority, that requires an ability for Republicans and Democrats to find some common ground,” he said.

“And right now, the structure of the system is such where it makes it really hard for people to work together. And we mentioned, an example earlier, the Supreme Court nominations. I mean, the fact that Mitch McConnell, the leader of the Republicans, was able to just stop a nomination almost a year before the next election and really not pay a political price for it, that’s a sign that the incentives for politicians in this town to be so sharply partisan have gotten so outta hand that we’re weakening ourselves,” he added.