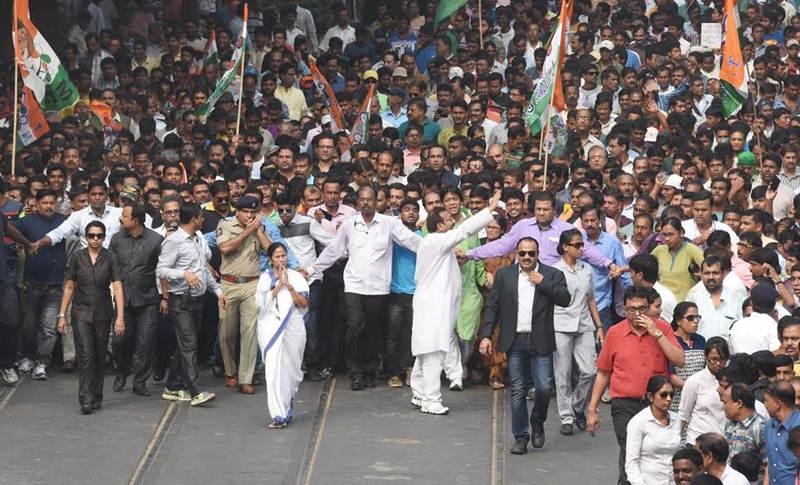 Kolkata: The ruling Trinamool Congress on Thursday looked set for a resounding victory crushing all opposition parties in rural West Bengal, after nearly 11 hours of vote count in the three-tier state Panchayat election, with the BJP emerging a distant second in almost all the districts.

The Left Front, which ruled the state for 34 years till 2011, lay decimated in the third position, while the Congress was virtually wiped out in Monday’s polls, which were marred by widespread violence and allegations of strong-arm tactics and irregularities against the Trinamool. As per latest reports, the Trinamool had won or was in the lead in over 80 per cent of the lowest tier Gram Panchayat seats, and over 90 per cent of the middle level Panchayat Samiti seats. In the top tier, Zilla Parishad, the Trinamool almost wiped out the opposition.

According to the latest figures, Trinamool has won in 20 out of 825 Zilla Parishad seats and is comfortably leading in another 22, while the opposition parties drew a blank. The state’s ruling party also has won or was ahead of its rivals in 570 Panchayat Samiti seats. The Bharatiya Janata Party (BJP) and the Left Front have won or were leading in 24 and seven seats, respectively.

In the vote count for the Gram Panchayat, the Trinamool has already won or was leading in 16,166 seats, leaving the BJP far behind at 4,020 and the LF at 1,142. The BJP, however, gave a tough fight to the Trinamool in two western districts — Purulia and Jhargram. Another interesting development was the performance of the Independents, who have bagged more seats than the LF.

In South 24 Parganas district’s Bhangar that has been on the boil over the construction of a power grid sub-station by the state government in the last one year, Independent candidates backed by Jomi-Jibika-Bastutantra O Poribesh Rokkha Committee (committee for protecting life, livelihood, ecology and environment) won five out of the eight Gram Panchayat seats, where they had filed their nominations via WhatsApp.

The Panchayat Samiti was, however, won by the ruling party strongman Arabul Islam who was arrested a day before the election for his alleged involvement in the murder of a local youth. The Trinamool Congress leadership refused to celebrate as a lot of counting still remained.

“It is a massive victory for Trinamool. The opposition thought giving outside support to the Independent candidates would reap them benefits. It has been proved wrong as all of them have been wiped clean. People voted for Trinamool Congress and its leader Mamata Banerjee,” West Bengal Food and Supplies Minister Jyotipriyo Mullick said.

Sporadic incidents of unrest over the election results were reported from certain districts like Nadia where a group of miscreants allegedly ran away with ballot boxes. The counting of votes was halted for almost three hours in Nadia’s Majhdia after allegations of tampering with the ballot papers were received. “There are some reports of unrest in the districts but the administration concerned has already taken action. There are no reports of major violence from anywhere,” SEC Secretary Nilanjan Shandilya told IANS.

In Birbhum district, BJP and Trinamool Congress activists clashed with each other outside a counting station. The police had to resort to baton charge to disperse the mob. According to the state administration, 12 people lost their lives on the polling day among which death of six people were confirmed to be due to poll violence. However, opposition political parties claimed the death toll on the polling day had gone up to 21, while five more people died the next day.

Statistics reveal that of the total 58,692 seats in the three tiers of the rural local bodies, 20,076 seats, or 34.2 per cent, have been decided uncontested, with the Trinamool bagging a whopping proportion of these seats. These include 16,814 of the total 48,650 Gram Panchayats seats, 3,059 of the 9,217 Panchayat Samiti seats and 203 of the 825 Zila Parishad seats. The Supreme Court has now asked the SEC not to issue winning certificates in these seats.