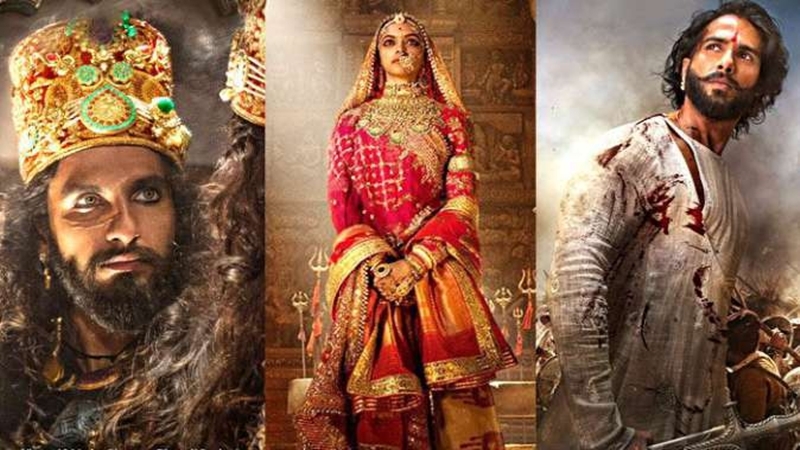 The controversy around filmmaker Sanjay Leela Bhansali’s film Padmavati has brought together all forces of filmmakers around the country together.

The political body – Rajput Karni Sena – has objected to any romantic scene between Rani Padmavati, played by Deepika Padukone and Allauddin Khilji, played by Ranveer Singh.

As the political body greats aggressive with every passing day, Bollywood seems to be uniting with equal aggression. It’s not the just the silver screen stars, who are showing support, even the small screen idols believe in giving art the freedom it deserves.

Tinaa Dattaa: How is an actor liable for this ya?? We are just actors we are portraying a character that’s all. Every actor portrays different characters on the silver screen. Some are fictional while others are inspired by some people in the history. Threatening an artist is not an acceptable way to show disagreement.

Ankit Bathla: India has such rich history and it has instances of peace and harmony. It is sad to see that a man, who is trying to bring forth the beauty of our heritage in front of the world, is being subjected to such torture.

Mrunal Jain: I take immense pride in our filmmaking. India is the largest producer of films and such incidences only put a blot on the face of the country on the global stage. A filmmaker like Sanjay Leela Bhansali, who is an experienced lover of cinema, should be treated with respect. Any objection to his work, is an objection to his sensibilities, which should never happen.

Ssharad Malhotraa: We have such amazing legends in our history. While no one can vouch for every incident which has taken place, there are stories which have been inspired by them. Padmavati is the labour of hard work of so many artists and crew. Resorting to violence and threats to bring down a beautiful story is not good. I love Sanjay Leela Bhansali’s work.

Sachin Parikh: I sincerely and seriously don’t think that the film will be delayed because of such lame reasons. This controversy should be soon mutually discussed and get over with it. Because the maturity lies in accepting the cinematic liberty and not to hurt sentiments on the personal front for feeble reasons. I am sure the makers will be taking precautionary and safe measures to clear the doubts of Maharani Padmavati and a filmmmaker like Bhansali will always take care of the dignity of an individual who is directly or indirectly shown in his filming. It’s a wise step by some industry fraternity personal who are coming in front and resolving the matter. I heard that MS Simi Garewal who happens to be a good friend of Maharani Padmini ji of Jaipur will make a settlement between them and the makers. I am Sure people will be happy to see the GHOOMER and PADMAVATI screening without any hurdles and delays in a matter of days to come.

Priyamvada Kant: Being a part of a historical show myself I can understand the research, hard work that goes into making something that can justify the grandeur and what’s been written in our books for centuries. But simply because someone assumed that history has been tweaked in Padmavati, no one has the business to vandalize a set, attack the director and threaten to behead the actors. In this fiasco, the people of Karni Sena have transcended the limits permissible in freedom of expression. I understand we are a country of religious sentiments but the existence of Padmavati is blurred, in a situation like this everything has blown out of proportion. We have to remember we are a country of beautiful stories art and artists but over time we are becoming more regressive and intolerant.

Suhani Dhanki: I don’t understand why people try to seek knowledge of history in films or television and why can’t they just view it as pieces of artwork. It is a director’s vision and it’s creative liberty that they take when they make cinema. They are not making a documentary, they are making a piece of art and that is how it is supposed to be viewed. And in all honesty, without even watching it on what grounds are these people are making these assumptions? I just feel very sad about this whole fiasco. On what grounds are they making this issue, especially when they are so uninformed. I have great respect for Sanjay Leela Bhansali and I already loved his film Bajirao Mastani in which he showed the Maratha’s at their highest. The Rajputs are raising their voices without even watching it. We can go against a film like Padmavati, which shows our rich culture and heritage but a film like Slumdog Millionnaire was viewed globally and taken pride in, but for what reason?

Sheeba: It’s ridiculous and unfair that a few fringe groups can hold a film worth crores at ransom. But for what purpose are they doing it? What greater good is going to surface after objecting a creative expression? I think our film industry need to group together and find a way out of this utter nonsense.

Rohit Purohit: I think people who are reacting this way without even watching the film do not make sense. They should not take the law in their hand and as far as filmmakers are concerned I think they should at least try to talk to the respected community. It’s very unfortunate that things like this are happening. The government should take action on it.

Gurpreet Singh: It’s censor board’s responsibility and they are the right people to decide whether Padmavati is released or not. Every person has a different opinion and if the debate will start on it, then it will never end. Padmavati has already been played by Vajayantiala and Anita Guha in Tollywood and Bollywood. Then why the objection to it now? Secondly Sanjay Leela Bhansali adapted the movie Padmavati from a book. If there is any problem, then why was the book released? I feel anybody who has an objection to this movie should watch it first and then give their opinion. There are so many people involved in filmmaking, their hard work should not be ruined by objection based on imagination.

Sneha Wagh: A film is a film. It’s a piece of art. It should be treated as art. Not some controversy center. History is something that no one can prove. A film is all about storytelling. It can be fictional, real story or a combination of BOTH. It’s just storytelling from the point of view of the filmmaker. If a filmmaker has to take safety measures for storytelling it doesn’t settle as ART.

Shraddha Musale: I believe we all are jumping the gun here. Authorities who have the power to decide the fate of the film should watch it before the release otherwise even a good intention by them might be perceived negatively. And also I believe artistic freedom comes with a lot of responsibility, which makers should practice and not take it for granted.