This Ghoomar dance on ice is going viral; watch it to know why! 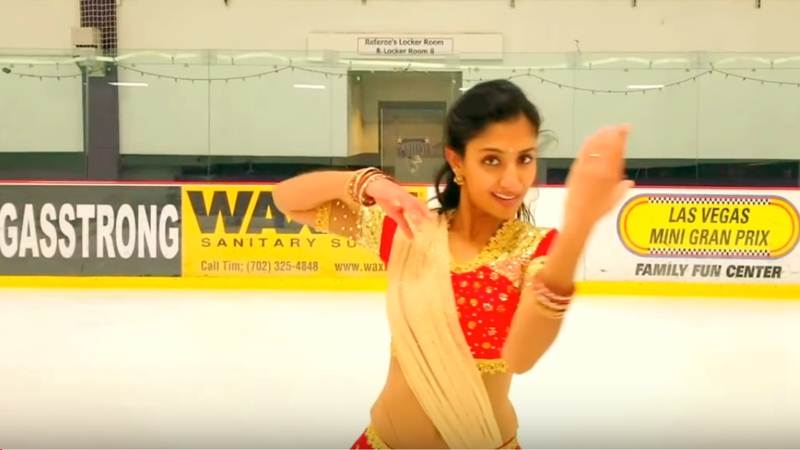 Padmaavat‘s song ‘Ghoomar‘ picturised on Deepika Padukone as Rani Padmini has inspired many including the aspiring dancers. One of them is Mayuri Bhandari, who is a figure-skater and a dancer. Mayuri, recently uploaded a video of herself dancing to the tunes of ‘Ghoomar’ at the Ice Centre in Las Vegas and it is going viral on social media soon after it was released on January 31. From cheerleaders dancing to Ghoomar during NBA match to US families booking an entire theatre to watch Padmaavat and wearing Padmavati-like clothes, the song has created a lot of buzz on social media.

In the video, Mayuri is dressed in red and gold blouse and skirt. She swirls and twirls on the ice rink effortlessly, in a tribute to Deepika’s Ghoomar. The video is captioned as, “In honour of the film Padmaavat‘s release, here is my ice skating tribute to the beautiful song Ghoomar! As a Rajasthani, I skate to this song with pride!.”

Earlier, a video of cheerleaders dancing on ‘Ghoomar’ during the NBA match in the United States of America, went viral. To note, ‘Ghoomar’ is a Rajasthani folk song which was picturised on Deepika Padukone in Sanjay Leela Bhansali’s ‘Padmaavat’. Dressed in gorgeous red and elaborate jewellery, Deepika twirls her way through the song as she performs Ghoomar in the royal court with other women. According to reports, Deepika performs on the song with over 66 twirls for the song.