The woman who led a micro finance revolution in villages

Chetna Gala Sinha started India’s first rural micro finance bank for women and by women in Mann Pradesh in Maharashtra. A cattle shed, water reservoirs, Business on Wheels for training women, and anti-liquor campaigns are only some of her initiatives that are transforming the region, says Vidyottama Sharma

Chetna Gala Sinha started India’s first rural micro finance bank for women and by women in Mann Pradesh in Maharashtra. A cattle shed, water reservoirs, Business on Wheels for training women, and anti-liquor campaigns are only some of her initiatives that are transforming the region, says Vidyottama Sharma

Chetna Gala Sinha was busy with her team of volunteer workers in Mhaswad village of Mann Desh taluka one day when an agitated Kantabai walked in. “The bank peoplesay they will not open my bank account because my amount is too meagre,” she said. “Why can I not open an account with the amount I have? How can I get the kind of money that is needed to open a bank account?” This upset Chetna. When the bank employees told her the same thing, she decided it was time to take one more step forward in that region where she had been transforming the lives of numerous women. “This is it,” she said. “We have to start our own bank”. And her team of 34 women set out to do just that. They approached the registrar. He guided them to open a co-operative bank. Chetna learnt the process. Andshe and her women volunteers divided the villages among themselves for fund mobilisation. “Each addressed 15 women a day to generate the share capital of Rs 600,000,needed to start the bank,” she informs. They also formed a co-operative society, Mann Desh Cooperative Society. Once the funds were in, they applied for a license to open a micro finance bank. But the Reserve Bank of India (RBI) rejected their application as the rural women were illiterate. This was a huge setback.

But they did not give up. They began organizing literacy classes in the evening in their respective villages. In six months, they applied for a license again. This time the rural women told a bank officer, “You had rejected our license earlier saying we were illiterate. We have returned after educating ourselves. You now tell us to calculate the interest of any principal amount as against your officers with calculators and let us see who does it faster and is accurate”. The officers were immensely impressed. 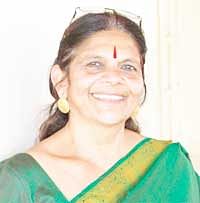 “That meeting had a heavy impact,” says Chetna. “I was nervous but these women have been my source of strength. They never give up. Their positive attitude makes me go ahead too”. This time RBI approved the license. With much difficulty, they rented a place and opened the Mann Deshi Mahila Sahkari Bank in 1997 with over 1000 accounts. The first fax, the first air conditioner, the first internet connection and the first Fiber Optic Telephones lines came to the region through this bank. It is India’s first rural women’s bank that has been started by women with their own money.

Women were issued smart cards. And to help the women, who were reluctant to travel to the banks for fear of losing their daily wages, the bank started doorstep banking. With over seven branches and two lakh customers, the bank has empowered thousands of womenwith many of them starting newer businesses.

Actually, this story began in the 1970s when Chetna Gala, studying in Mumbai, joined the Jayaprakash movement like many students of that time. After completing Masters in Economics, she taught at SNDT for one year. She married a fellow activist, Vijay Singh Gurav in 1986, left her job and city and moved toMhaswad village in Mann Pradesh. In the drought-stricken Mann Pradesh, the men often migrated to the cities to work. Chetna began helping the rural women get jobs under the government’s Employee Guarantee Scheme (EGS). To protect women from losing their earning to liquor shop owners who snatched away their wages as their husbands owed them money, Chetna began an anti-liquor campaign with 1000s of women. They would march to the liquor shops and put locks on their doors. This enraged the political leaders and liquor sellers. But the then Commissioner, Arun Bhatia, found merit in their complaints that the illegal liquor shops were ruining their homes and had the shops closed.

The Foundation also runs a Community Radio service. Kerabai hosts her own programme on it. She is so good with her poetry that film director Ashoutosh Gowarikar, who had visited them once, was impressed and asked her, “How do you write and sing such good poetery?” And Kerabai replied, “When I was young and hungry, I used to write and sing poetry to forget hunger”. Bikes are also being given to pupils to go to schools in other villages.

Chetna used to take up research projects for a living. In 1995, she was selected as the Ashoka Innovators fellow. By 1997, she had founded the Mann Deshi Foundation. She was also chosen as a Yale Fellow for a year. “That changed my entire life,” she says.

Since the women could not leave their jobs to undergo any kind of training, the Foundation bought a bus and began the Business on Wheels programme. Fitted with computers, the bus was used as mobile training vehicle to train women in computers, making bags, fashion designing and screen printing among other things. During the demonetisation days last year, the same bus was used extensively to reach women at their homes or work areas to help them exchange notes. Since the Rs 2000 note would not have helped them, the bank tapped into the huge reserves of small change and lower denomination notes of the state and nationalized banks, created pouches worth Rs 500, and exchanged them for old Rs 500 notes. Today the bus on wheels is used for financial literacy in the village.

For Chetna, every new initiative in the village arose out of a challenge.One day, in 2012, Kerabai approached the bank to mortgage her gold. When asked why she was doing so, Kerabai blasted Chetna, “There is no water in the area and my malnourished animals land up at the butcher’s place. My animals are like my children. Will you give away your children to the butcher just because you have no water?”

Chetna could not sleep that night. She took help from her Mumbai supporters and the government, and bought a tanker. Her team created a cattle camp on a piece of land. Water was fetched from a pond, 30 kms away, and brought to the cattle camp in the tanker. To meet the requirement of four lakh litres of water for cattle numbering 14000 from 70 villages, the Foundation dug a well near the pond. One day when one pregnant woman refused to go to her home from the cattle shed to deliver her baby as she couldn’t get water at her home, the Foundation took up the task of constructing water reservoirs. Today, Mann Pradesh has eight walled water reservoirs with each having a capacity of three to four crore litres of water.

Winner of many awards, Chetna continues to add one facility after the other in Mann Pradesh, undaunted, undeterred and unafraid. Hers is a motivating and captivating story. A story of faith, commitment and hard work. A story of empowerment.

HomeCmcmThe woman who led a micro finance revolution in villages