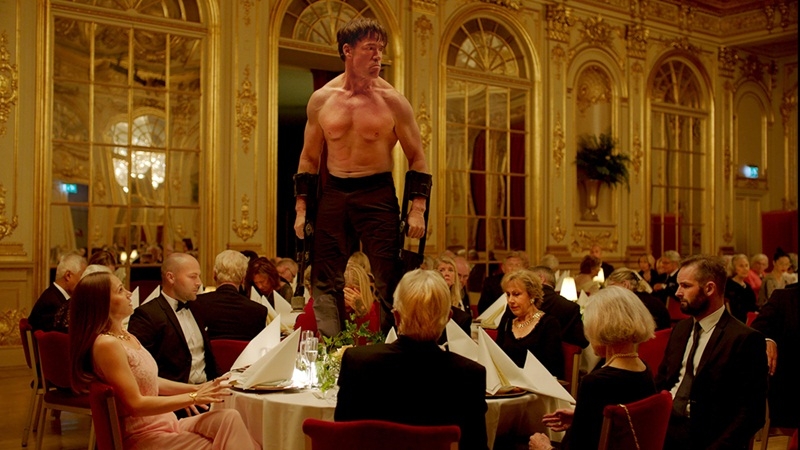 Director Ruben Ostlund’s “The Square” won the prestigious Palme d’Ore award at the Cannes Film Festival last year and is a force to reckon with, especially for its social commentary on the conflicting status of social class, power, fear and the behavioural reactions to each of these.

It is an atypical, funny and amusing art house film about an art house, specifically a pretentious Stockholm museum devoted to progressive modern art. It is a satire.

The gallery, a cold lonely place, full of large open spaces, white walls and quiet staff marginalised on the edges of the rooms, displays isolated installations where patrons try to find meaning in them.

The flow of the narrative is contradictory. It is linear and coherent, but also feels spontaneous and unpredictable with exaggerated humour, cynicism and briefly violent.

The plot, lined up with several real-life incidents, is sometimes mounted in lush cinematic saga that makes the heavy or awkward points about all sorts of uncomfortable and pressing contemporary topics amusing. In fact, though on-the-face, the audience is forced to find meaning in the scenes, just like how one does in abstract paintings.

Director Ostlund, though artistic in his approach, has used abstruse motifs, characters, jokes and cultural criticism.

He unravels his oeuvre through the perspective of a sophisticated, highly educated and instinctively liberal art museum curator, Christian (Claes Bang), who during an interview with Anne (Elisabeth Moss) – an American journalist – finds it difficult to explain his major cutting edge artistic project.

The project has a square outlined in an open area and a message that reads: “The Square is a sanctuary of trust and caring. Within it we all share equal rights and obligations.”

The square represents a political and ethical construct rather than simply a physical space. It represents people’s sheltered nature as they hide from realities outside their comfort zones and social classes.

The actual narrative kicks off after a bizarre public incident in which Christian admirably protects a hysterical woman from being thrashed by an angry man. After the incident, he finds that his wallet and phone are stolen, which leads him to believe that the culprits live in a dodgy part of town.

So, with the help of his colleague Michael (Christopher Laesso) he tries tracing his stuff, which prompts him to send a moralistic letter to all the residents in the area. The outcome of the exercise is the crux of the narrative.

On a separate note, we see him battling with; on personal issues with Anne and his daughters and on his professional front – a charity dinner and a distasteful marketing campaign going awry.

Every scene, though ambiguous and imperfect, is predominantly stretched to emphasise. The first two acts meander haphazardly and the final act seems to be wrapped up in a hurry, making the film seem a bit abrupt.

However, the tonal shifts from comedic to fearful, show how an unfamiliar social situation or environment affects our emotions.

The performances of every actor are effortless and natural. In keeping with the theme of the film, how the characters switch from Swedish to English also typifies their moving from their comfort zones.

The film, with ace production values – the camerawork, sound designs and production designs – work towards a potent and stylishly disturbing film which is more of a creative fantasy. Overall, the film may appeal only to a few.